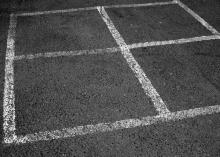 Four square has been a popular playground game for years. It has also been called box ball and Kings Corners, and although there is little verified history of the game, it is thought to have been played in some form since the turn of the 20th century when it was mentioned in children’s books. Because it is a fast paced ball game that is easy to play with no time constraints, it has been a great game to play during recess.1

Many schools have a four square playing area marked on the playground surface, but the squares can also be drawn with chalk on concrete outside or marked with tape on an inside surface. The size of the large outside square can range from 10’ x 10’ for children to a larger regulation size of 16’ by 16’. The large outside square is divided into four equal sized smaller squares with each box labeled as 1, 2, 3, 4 or A, B, C, D.2

The game of four square is enjoyed around the world with varying rules. Played with one player for each square, the object of the game is to advance to the highest square by eliminating other players. A rubber 8.5 inch playground ball is bounced between players until someone makes an error and is eliminated. When a player leaves the court, the other players advance to fill empty squares and a new player comes into the game in the lowest square. A line of additional players standing to the side of the playing area wait for their turn to be added to the game, while eliminated players go to the end of the line.3

The fast paced nature of the game allows for a good number of children to play the game. The game can also be played with eight children playing as teams of two for each square with one team member playing at a time and switching after each hit. Rules for each round can also be changed by the player in the highest square.5