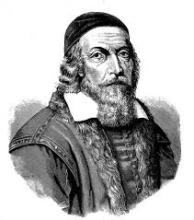 John Amos Comenius was an education reformer and religious leader who is now known as the Father of Modern Education. He revolutionized education in the way school systems were set up, created a general theory of education around the idea  of children learning at a natural pace from simple concepts to challenging theories, and wrote a series of textbooks on teaching methods and subject matter for children.1

Born March 28, 1592 in Nivnice, Moravia, which is now in the Czech Republic, Comenius was raised by parents who were respected members of a Protestant group known as the Bohemian Brethren. He was encouraged to enter the ministry and eventually became a leader of the Moravian Church, which was forced into exile in Poland during the Thirty Years’ War with persecution from the Catholic Church of Rome. During his time in hiding he wrote an allegory, The Labyrinth of the World and the Paradise of the Heart, in which he described his despair and his sources of consolation. His allegory predated the much better known Pilgrim’s Progress written by John Bunyan.2

Believing that one day Protestants would eventually win and liberate Bohemia, he began to prepare for the possibility of rebuilding the society there through a reformed educational system. His early education as a young man had been in a Latin school, which was the classic system of the day. He called his early school setting as “the terror of boys and the slaughter-houses of minds; places where a hatred of literature and books is contracted, where ten or more years are spent in learning what might be acquired in one, where what ought to be poured in gently is violently forced in and beaten in.”3

His reform of the existing education systems called for a revolution in methods of teaching calling for approaches that would allow learning to be rapid, pleasant, and thorough. The way children naturally learned needed to be carefully considered rather than the mindless memorization of texts without understanding the material taught. Teaching in Latin was seen as necessary, but rather than focusing only on grammar, learning about useful facts was proposed. Comenius wrote Didactica Magna (The Great Didactic), published in 1632, which laid out his educational ideas. He also wrote a textbook, Janua Linguarum Reserata (The Gate of Tongues Unlocked), which compared Latin and Czech and identified learning words with things. This book was well received throughout Europe and was subsequently translated into several languages. Through the success of the book, he became well known throughout Europe.

He was invited to England to establish a college in 1641 to institute his program of educational reform with the hope of reforming human society. His notable essay, The Way of Light, which set out his program, was well received; however, when the English Civil War broke out in 1642, he was forced once again to move. He accepted an offer from the government of Sweden to help reform the schools there by writing a series of textbooks.4 He based his textbooks on a system of philosophy he called pansophy, which meant “all knowledge” and called for incorporating theology, philosophy, and science into one all-embracing, harmonious worldview.5 Although he struggled to produce the textbooks, which failed to be accepted as satisfactory, he did continue to write and develop his ideas in laying a foundation for a new teaching philosophy.

When the Thirty Years’ War ended in 1648, his homeland was ceded to Rome, and he was forced to go elsewhere to see his ideas accepted. He was invited to Hungary to establish a school by a young prince, but his early attempts at educational reform proved unsuccessful. He returned to Poland with a manuscript for a picture textbook he had written for his students, but for which he had not been able to obtain the necessary woodcuts for the pictures. He sent the manuscript to Germany, where the woodcuts were done, and the resulting book, Orbis Sensualium Pictus (The Visible World in Pictures) was published in 1658.6

The book was published in Latin and German and contained 150 pictures showing everyday activities such as tending gardens, baking bread, and brewing beer. Pictures of animals and the corresponding sounds they make produced the phonetic system for reading. The text of the book contained Biblical themes along with chapters on science, astronomy, music, and recreational activities of the day, which he believed would give students a strong foundation for successful living. The book clearly aimed to engage children on their level with topics that would interest them. The book was translated into most European and some of the Oriental languages, and became the standard textbook in Europe for two centuries. It is thought to be the first picture book written for the education of children and was the precursor to other illustrated textbooks of later times.7

When war broke out in Poland, many of his manuscripts were destroyed, and he was forced to escape to Amsterdam, where he remained for the rest of his life and died in 1670.8 During his lifetime he wrote more than 154 books, mostly dealing with educational philosophy and theology.9

Comenius advocated for an educational system that allowed all children the opportunity to learn. In The Great Didactic, he stated: “Not the children of the rich or of the powerful only, but of all alike, boys and girls, both noble and ignoble, rich and poor, in all cities and towns, villages and hamlets, should be sent to school.”10

Some of the many reforms he proposed included:

Comenius was one of the first to recognize the importance of educating very young children. He wrote a text for mothers entitled The School of Infancy, which was intended to guide them in exposing their young children at home to subjects they would encounter later in school. He also suggested school levels, which are universally accepted today: nursery school up to the age of 6 (kindergarten), vernacular school from ages 6 to 12 (primary school), Latin school for ages 12 to 18 (secondary school), and university education based on merit and achievement.

Although most of Comenius’ educational proposals are accepted worldwide today, his work was virtually ignored after his death. It was rediscovered late in the nineteenth century with the development of universal education, and he is recognized today as one of the greatest scholars of education in history.12