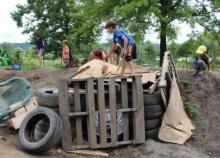 The Hands-on-Nature Anarchy Zone, an adventure playground at Ithaca Children’s Garden (ICG), is a partnership with the U.S. Fish and Wildlife Service in Ithaca, New York. Natural elements such as water, sand, clay, boulders, and logs along with straw bales, old tires, cardboard, and other loose parts are available for exploration. Visitors are invited to get muddy, wet, and dirty while exploring their connection to nature.1

The type of play that allows children to have the time and space to direct their own play out of doors has been described as free play, adventure play, risky play, rough and tumble play, and nature play. Unstructured play allows children to be in charge of their play whether it involves building things, destroying things, getting dirty, or taking calculated risks. When children are allowed to act independently, they learn to make decisions, solve problems, generate creative ideas, and navigate social situations. Playing outdoors with nature empowers them to connect with nature in meaningful ways to them, and these experiences can stimulate a greater respect and love for nature.

The idea of an “Anarchy Zone” – a wild, messy play space where children could build, construct, create, tinker, and experiment – had been part of ICG’s vision dating back to 2006. When ICG met up with Rusty Keeler of EarthPlay, David Stilwell of the New York Field office of the U.S. Fish and Wildlife Service, and early childhood development specialist Elizabeth Stilwell in 2011, it was clear that the innovative and powerful idea now had what it needed to come to fruition.

The vision took shape at Ithaca Children's Garden starting in 2012, transforming 1/3 acre of meadow into one of America’s first adventure playgrounds in the 21st century. The local community responded when the call for loose parts was made, and soon the program had donated straw bales, rope, loose tires, cardboard boxes, log chunks, large stumps, and woodchips on site. A large storage shed was added to stow tools, shovels, and a wide variety of play materials. The shed features a mural by local artist Marika Chew depicting some of the ways children use the Hands-on-Nature Anarchy Zone.

The official opening was on International Mud Day, June 20, 2012. Four dump truck loads of screened topsoil were delivered, and the Ithaca Fire Department was invited to spray it all down into a muddy mess. Children and adults were invited to play in the mud pit, and learn firsthand about the qualities of soil, mud, water, plants, and natural elements.

From the beginning, instead of designing a space with specific features and details, the Hands-on-Nature Anarchy Zone has developed in response to the wishes of the children who play there. The space is bordered by a 3-foot high berm planted with daylilies and tall wildflowers. Mature shade trees are suitable for climbing and hanging tire swings, and the loose construction materials invite children to build forts, dig in the mud pit, or construct whatever they can imagine. The environment allows for inclusive play for all to enjoy the rich, sensory experiences nature affords.2

The Hands-on-Nature Anarchy Zone integrates models of nature play, adventure playgrounds, and city farms from Germany, Scandinavia, and the United Kingdom. The original concept for adventure playgrounds has its origins in Europe, when during and after World War II, children were observed playing in the rubble of bombed out areas climbing in the debris and building forts and play things out of scrap lumber and other salvaged materials.3

The first adventure playgrounds were staffed by workers called “wardens.” Their primary job was to unlock the tool sheds at the playgrounds that held the building materials for the children to play with each day. Soon they became known as “play leaders” and then “playworkers,” however, they were careful to not lead the play activities, but assist children where needed.4 Playwork is the theory and practice of supporting and fostering a culture of play by setting up an environment and providing whatever support is needed for kids to really direct their own play.5