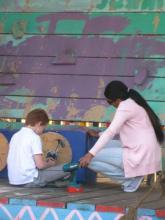 The Glamis Adventure Playground, located in the Shadwell area of East London, is a free supervised playground that provides a wide range of child-centered and child-driven activities. The local children, ages 6-16, can play indoors or outdoors, build or remodel play structures, grow plants and explore natural settings, create real and fantasy places with loose parts, and repair bikes.1 A hand painted sign at the entrance declares the inclusive nature of Glamis Adventure Playground, “There is no war here. We are all fantastic.”2

The site of Glamis Adventure Playground was once a children's hospital. In 1963 the hospital was demolished and the land which was dedicated for children's needs was vacant until 1969 when it became one of London's first adventure playgrounds. The adventure playground movement began with the Danish landscape architect C. Th. Sorensen who noticed that children were not playing in the playgrounds he had designed. In 1943 he built an adventure/junk playground in Emdrup, Denmark, which Lady Allen of Hurtwood visited in 1946.3 She brought the concept to London and transformed bombed out lots into supervised junk playgrounds.

By the 1960s the movement had expanded geographically across Europe and inclusively to involve children with disabilities. In the densely populated Shadwell community this meant transforming a vacant lot into a safe play space for children living in the nearby Tower Hamlets. With the support of the Greater London Council, the original Glamis Adventure Playground was developed during the 1970s, including a building for inside play.4 A generation of children played there until the early 1990s when the Greater London Council was abolished and they lost their funding. The gates were closed, the building was demolished, and the lot became a play area for cats instead of children.

However, with 35% of the Shadwell population under 18 years of age and 60% of their children living in “relative” poverty, the majority of the community was in favor of reopening the playground. Working with Play Association Tower Hamlets (PATH) and securing council approval, the community opened the gates again in 2002. That first year was a struggle to establish a Management Committee, re-establish play in the children's lives, earn the community's trust, and find the funding needed for continued supervision and operational costs.

The following year they were given charitable status which opened funding doors, such as support from the Children's Fund. Since then Glamis Adventure Playground has employed playworkers, built play structures, erected a portacabin and toilet facilities, and achieve “Level One” Quality in Play status. In 2005 additional funding came from the National Lottery's Outreach and Inclusion Project which meant Glamis Adventure Playground could add sessions for a “girls only” play day and include more children with special needs. With one third of Shadwell from Bangladesh, a girls only time was necessary to allow the Muslim girls a time to play freely.5

Consequently, they began attracting attention from play professionals as they successfully provided a place where “play is play,” where children of all ages and abilities could find “a level of challenge,” and where “a broad range of children play comfortably together as children have done through the ages.”6 Activities include indoor games and crafts and outdoor building projects, sandpits, gardening, camp building, and bonfires.7 They also bring in local musicians, circus performers, and drama groups to play with the children in the playground.8

Based on four play theories – Bob Hughes' 16 play types, Loose Parts, Play Cues and Play Frames, and the Edge of Chaos – Glamis Adventure Playground provides the children of Shadwell “a green oasis” because “play is in part a rehearsal for life, a way of working things through, experimenting with their world in a relatively secure environment.”9