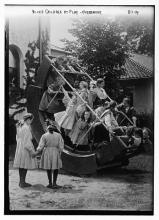 Although destination playgrounds seem to be a new trend in playground design, they have actually been around since the late 1800s. As part of the American playground movement, playgrounds were built as a response to the rapid immigration, industrialization, and urbanization of the big cities. At this same time, new theories in child psychology, education, and medicine promoted the importance of play in child development. By the mid-twentieth century there were three main types of playgrounds that were commonplace: community playgrounds in residential neighborhoods, schoolyard playgrounds, and destination playgrounds. Destination playgrounds were impressive, multi-acre properties often located on the edge of city limits and were often seen as “sanitized” versions of popular commercial amusement parks, such as New York’s Coney Island. An early example of a destination playground that is still in operation is Smith Memorial Playground and Playhouse, which was built in the mid-1890s in Philadelphia.2

Playgrounds that are different from the norm capture the imaginations of children, and themed elements in playgrounds often inspire pretend play and engage children for hours. Many destination playgrounds are custom-designed to incorporate features from the natural environment or to highlight local history or culture.3 A variety of play elements mixing nature and manufactured equipment offer a good balance of activities and make the playground more exciting. Innovative products which are more physically and mentally challenging appeal to older children. Climbing nets, walls, and boulders force children to think how they are going to navigate the structure and plan their route. With age appropriateness and graduated levels of challenge designed into the play equipment, more children are enticed to play and often for longer periods of time, which adds to the appeal of destination playgrounds. Without compromising safety, challenging play elements are seen as fun.4

Truly inclusive playgrounds often fit the description of destination playgrounds. To go beyond just meeting Americans with Disabilities Act (ADA) requirements, inclusive playground designs strive to make every aspect of play available for every child. Many inclusive playgrounds have had multimillion dollar designs that integrate many exciting features that attract children of all abilities, who often travel great distances to enjoy them. Recognizing in the disability community that only 10 percent use wheelchairs and 90 per cent have cognitive issues such as autism, not just accessibility is addressed, but sensory elements are included in the play design as well as areas for retreat for those needing a quiet space. Features may include natural areas where children might play in water or with sand, and being in nature has been shown to have a calming effect on children. The swinging, spinning, and sliding playground equipment elements provide serious therapy needed for those with cognitive issues developing their proprioceptive and vestibular senses. Often musical elements are included as well which have a big impact on children who are autistic.5

Water parks are increasingly popular and often draw huge crowds of children and adults. These destination playgrounds can become quite elaborate with a variety of water slides, lazy rivers, splash areas, wave pools, and water falls.6