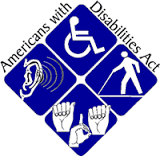 The Americans with Disabilities Act (ADA) is a civil rights law that prohibits discrimination against individuals with disabilities in all areas of public life, including jobs, schools, transportation, and all public and private places that are open to the general public. The law gives civil rights protections to individuals with disabilities similar to those provided to individuals on the basis of race, color, sex, national origin, age, and religion, and seek to make sure they have the same rights and opportunities as everyone else.1

The law guarantees equal opportunity for individuals with disabilities in public accommodations, employment, transportation, state and local government services, and telecommunications. It is divided into five titles (sections) that relate to different areas of public life.

Title I – Employment is designed to help people with disabilities access the same employment opportunities and benefits as others without disabilities and applies to employers with 15 or more employees who are required to provide reasonable accommodations to qualified applicants or employees without causing the employer undue hardship.

Title II – Public Services: State and Local Government requires public entities to make their programs, services, and activities accessible to individuals with disabilities. It outlines requirements for making reasonable modifications to policies, practices, and procedures where necessary to avoid discrimination, identifying architectural barriers, and communicating effectively with people with hearing, vision, and speech disabilities. Public transportation, such as bus and rail service, and privately funded transportation, such as taxicabs, airport shuttles, intercity bus companies, and hotel-provided transportation also fall under this section.

Title V – Miscellaneous Provisions contains a variety of provisions relating to the ADA as a whole, including its relationship to other laws, state immunity, its impact on insurance providers and benefits, prohibition against retaliation and coercion, illegal use of drugs, and attorney’s fees. It also provides a list of certain conditions that are not to be considered as disabilities.2

The Americans with Disabilities Act was signed into law at a signing ceremony at the White House on July 26, 1990, by President George H.W. Bush, but it took decades of grassroots activity to bring it to the signing table. As Americans began to challenge the societal barriers that excluded individuals with disabilities from their communities, the establishment of the independent living movement took root protesting the notion that those with disabilities should be institutionalized. This resulted in thousands of people who made up the disability rights movement working to make the injustices faced by people with disabilities visible to the American public and to politicians. They adopted many of the strategies of the civil rights movement, including sit-ins, marching through streets, and seeking justice in the courts and in the halls of Congress.

The historic shift in disability public policy occurred in1973 with the passage of Section 504 of the 1973 Rehabilitation Act, which banned discrimination on the basis of disability by recipients of federal funds. Finally, the exclusion and segregation of people with disabilities was viewed as discrimination rather than the former view that their problems were inevitable consequences of their physical or mental limitations imposed by the disability itself. With this, Congress recognized that legislation was necessary to abolish discriminatory policies and practices. Section 504 characterized people with disabilities as a class, a minority group, deserving basic civil rights protections.

The Department of Health, Education and Welfare (HEW) was tasked with defining regulations to implement Section 504.It was important to the disability rights movement that the regulations not only provide meaningful anti-discrimination protections, but also mandate affirmative conduct to remove architectural and communication barriers and provide accommodations. After four years of a very active campaign by the disability community, the Section 504 regulations were issued on May 4, 1977.

However, the disability community had to defend the regulations they had fought so hard to achieve. After taking office, President Ronald Reagan established the Task Force on Regulatory Relief under the leadership of then Vice President George H.W. Bush to “de-regulate” regulations, which were burdensome to businesses, and Section 504 regulations were chosen for deregulation. For two years, disability community representatives worked to explain the importance of the Section 504 regulations to the Administration, and with public outpouring of support, the efforts to deregulate Section 504 were halted.3

During much of the 1980s, the fight continued with Supreme Court decisions involving Section 504 cases. The disability community was successful in passing legislation that supported their cause. The Americans with Disabilities Act went through numerous drafts, revisions, negotiations, and amendments since the first version was introduced in April 1988. A joint hearing was held on September 27, 1988 before the Senate Subcommittee on Disability Policy and the House Subcommittee on Select Education. Over 80 people testified to an overflowing crowd, and the result of these efforts was the promise to have the ADA bill on the legislative agenda for the 101st session of Congress in 1989.

On May 9, 1989, Bill S.933 was introduced to the Senate. After several months of hearings, debate, and amendments, the bill passed the Senate by a count of 76 to 8 on September 7, 1989. The bill went to the House of Representatives where it was considered by four committees, which complicated the process with four different drafts of the ADA. The Rules Committee was tasked with producing a bill that synthesized the four versions, and on May 17, 1990, the House met to consider passage of the ADA resolution. More debate ensued, but the final vote passed with 95% approval on May 22, 1990. Further deliberations were presented in the Senate, but their final vote passed with 93% in the affirmative.

With a large crowd of approximately 3,000 persons gathered on the White House South Lawn on July 26, President George H.W. Bush signed the bill into law stating that the law offered persons with disabilities the basic guarantees of “independence, freedom of choice, control of their lives, the opportunity to blend fully and equally into the right mosaic of the American mainstream.”4

In September 2008, the Americans with Disabilities Act Amendments Act (ADAAA) was signed into law and became effective on January 1, 2009. The purpose of the act was to overturn a series of Supreme Court decisions that interpreted the Americans with Disabilities Act of 1990 in a way that made it difficult to prove that an impairment is a disability. The ADAAA made significant changes to the ADA’s definition of disability that broadened the scope of coverage under the ADA.5

The Department of Justice revised regulations for Title II and III of the Americans with Disabilities Act of 1990 to provide guidance for implementation of the standards. On July 23, 2010, Attorney General Eric Holder signed final regulations revising the Department’s ADA regulations, including its ADA Standards for Accessible Design.6

The U.S. Access Board, created in 1973 to develop accessibility guidelines to help with enforcement of the Architectural Barriers Act (ABA) of 1968, was now charged with developing guidelines under the Americans with Disabilities Act. The Board published the ADA Accessibility Guidelines (ADAAG) on the first anniversary of the ADA in 1991. Through the years that followed, the Board supplemented the ADAAG to specifically address state and local government facilities, including courthouses and prisons (1998), children’s environments (1998), and recreation facilities, including play areas (2000-2002) as well as access to streets and sidewalks and to trails, beaches, and picnic and camping areas.7

The supplement to the ADAAG for children’s play areas published by the U.S. Access Board is called “Accessible Play Areas: A Summary of Accessibility Guidelines for Play Areas.” It is intended to help designers and operators in using the accessibility guidelines for newly constructed and altered play areas, providing individuals with disabilities an equal opportunity to enjoy the play area. It defines what play components are, how many play components must be on an accessible route, and how to meet the minimum requirements of the guidelines. Accessible routes, both ground-level and elevated, are pathways specifically designed to provide access for individuals with disabilities, including those using wheelchairs or mobility devices.

Ground surfaces must comply with ASTM International (ASTM) F1951-99 Standard Specification for Determination of Accessibility to Surface Systems Under and Around Playground Equipment. This standard assesses the accessibility of a surface by measuring the work an individual must exert to propel a wheelchair across the surface as well as making turning movements. For accessible ground surfaces located with the use zone of playground equipment, the surfaces must also be impact attenuating and meet ASTM F1292-04 Standard Specification for Impact Attenuation of Surface Systems Under and Around Playground Equipment.