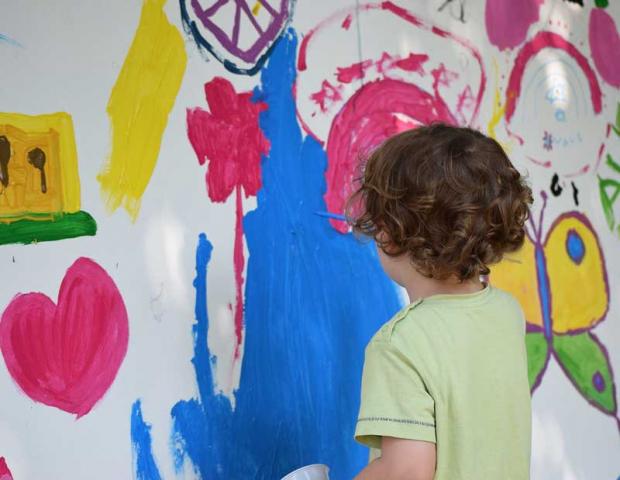 The Reggio Emilia Approach is an approach to teaching children based on observing what children know, what they are curious about, and what challenges them. Teachers record these observations and guide the children in developmentally appropriate ways to help them expand their learning. The emergent curriculum develops as the teachers actively seek out and follow the interests of the children.1

The name of this teaching philosophy comes from the area in Italy where it was founded. In 1945 shortly after the end of World War II, a group of women in the northern region of Italy near Reggio Emilia salvaged materials from their war-torn area to build a school. The women wanted a preschool for their children to provide a new form of education that would ensure their children would not tolerate injustice and inequality. A newly trained primary teacher, Loris Malaguzzi, was urged to teach the children at the first of what became many preschools in the surrounding areas. Malaguzzi worked with the other teachers in Reggio preschools to develop their approach to education gathering information from theories and philosophies of education from other prominent educators. They viewed children as strong, powerful, and competent to learn through their own exploration.2

This philosophy differed from Jean Piaget’s widely-accepted perspective that viewed child development as largely internal and occurring in stages. More in line with Lev Vygotsky’s views, Malaguzzi believed that social learning preceded cognitive development and emphasized the building and sustaining of relationships in the Reggio approach. Malaguzzi felt “it was not so much that we need to think of the child who develops himself by himself but rather of a child who develops himself interacting and developing with others.”3

The defining principles of the Reggio Emilia Approach begin with the image of the child. All children are seen as having curiosity, potential, and an interest in building relationships, constructing their own learning, and in negotiating with everything they come in contact with in their environment. Children are considered contributing members with their families and their local community and as being active citizens with rights. Children with special needs are referred to as children with special rights, and they have precedence in becoming a part of the learning environment. The focus on each child is seen in relation with the family, with other children, with the teachers, with the environment of the school, with the community, and with the wider society. These relationships are interconnected, reciprocal, and actively supported.4

The Reggio approach suggests there are three “teachers” that are involved with children’s learning – the parents, the classroom teachers, and the environment of the classroom.5 Parents are considered a competent and active part of their children’s learning experience. They are encouraged to be involved in furthering what the children are learning in school. Teachers are seen as learners along with the children and fulfill the role of researchers to provide resources for learning what the children are actively studying. The layout of the physical space encourages an environment that fosters communication and relationships. Spaces that support the engagement of small groups are intentionally organized.

A distinguishing principle of the Reggio approach is the lack of a pre-set curriculum. The teachers provide an environment rich in materials and possibilities to stimulate children’s interest. As the teachers observe and listen to the children, they perceive how to develop their interests by providing resources and asking questions to discover the children’s ideas, hypotheses, and theories.6 The spontaneity of the children requires creativity on the part of the teachers. The emergent curriculum based on the interests of the children engages and builds upon their current knowledge. The teachers actively document what is happening in the classroom with transcriptions of children’s remarks, photographs of their activity, and ongoing work done by the children. The teachers meet regularly to compare notes and discuss the direction of the learning process.7

As part of the culture of learning, children are encouraged to draw what they are observing and write about their observations. Projects are central to children’s learning and stem from the belief that learning by doing is important and that discussing in a group their ideas and experiences aids their learning. Project ideas often come from children’s experiences, a chance event, or from a suggested problem to solve. They can last from a few days to several months.8

The program emphasizes children’s symbolic languages, which have been referred to as the hundred languages of children. These languages are expressed through artwork, conversation, early writing, dramatic play, music, dance, and other outlets. A teacher with a background in the visual arts works closely with the children and the other teachers. The teacher works in a special workshop or studio called an atelier, which is a French word meaning workroom or artist’s studio. This special place separate from the classrooms is filled with a great variety of tools and materials where children use creative art as a tool to represent their ideas and feelings.9 The teacher is referred to as an atelierista. The creations by the children in the studio are not considered art per se, but are viewed as expressions of the learning the children are experiencing. Mini-ateliers are also set up in the classrooms for work on projects.10

International interest in this educational approach gained momentum in 1980 with exhibitions Malaguzzi conducted throughout Europe. A 1991 Newsweek magazine article named the Diana preschool in Reggio Emilia the most avant-garde early childhood institution in the world, which led to a huge interest from the United States and throughout the world.12