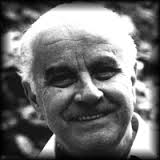 Loris Malaguzzi was an early childhood educator who founded the educational philosophy known as the Reggio Emilia Approach. He was instrumental in the creation of a network of municipal preschools and infant-toddler centers in the Italian town of Reggio Emilia.1

Loris Malaguzzi was born in Corregio, Italy in 1920. Growing up in Italy he experienced life under Fascism. In 1939 his father encouraged him to enroll in a teacher training course and he studied to be a primary school teacher during World War II.2 Shortly after the end of the war in 1945, Malaguzzi discovered a group of women in the little town of Villa Cella in the northern region of Italy near Reggio Emilia cleaning bricks near the river.3 They were salvaging materials from their war-torn area to build a school. The women wanted a preschool for their children to provide a new form of education that would ensure their children would not tolerate injustice and inequality. Their first school was financed by selling nine horses, a German tank, and two military trucks that were left behind by the retreating German army.4

Malaguzzi was urged to teach the children at the first preschool opened in 1946. Though inexperienced, he promised to do his best, and the parents were directly involved in running and financing the school during the early years.5 In 1950 he qualified as an educational psychologist and founded the Psycho-Pedagogical Medical Centre in Reggio Emilia where he worked for more than twenty years.6

Malaguzzi worked with the other educators in Reggio preschools to develop their approach to education gathering information from theories and philosophies of education from others including Maria Montessori. The Reggio Emilia Approach views children as strong, powerful, and competent to learn through their own exploration. Children are encouraged to develop their own theories about how their environment works through discovery.9 Working in groups with other children, the emphasis on building and sustaining relationships with others is at the core of the philosophy. Teachers and parents serve as “researchers” who carefully observe the children’s interests and provide encouragement and resources to explore those interests. Rather than a structured curriculum, the environment is flexible as teachers are responsive to the interests of the children allowing their interests to dictate the direction of their study. Children are encouraged to actively draw and write their observations and use their “symbolic languages,” referred to as the hundred languages of children, through artwork, conversation, early writing, dramatic play, music, dance, and other outlets. Malaguzzi stated “What children learn does not follow as an automatic result from what is taught, rather, it is in large part due to the children’s own doing, as a consequence of their activities and our resources.”10

Malaguzzi devoted his life to promoting his innovative philosophy of education. He was a consultant to the Italian Ministry of Education, was the director of the education journals Zerosei and Bambini, and in 1980 he established the National Early Childhood Group in Reggio Emilia.11

International interest in his educational approach gained momentum in 1980 with exhibitions he conducted throughout Europe. A 1991 Newsweek magazine article named the Diana preschool the most avant-garde early childhood institution in the world, which led to a huge interest from the United States and throughout the world.12

In 1992 Malaguzzi was awarded The LEGO Prize for his outstanding contribution to the lives of children, and in 1993 he was rewarded by the Kohl Foundation for his work. Malaguzzi retired in 1985 but continued his support of his education system participating in conventions and meeting with local preschool administrators, teachers, and parents on an almost daily basis until his death in 1994.13