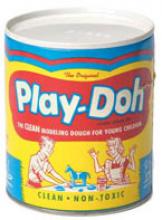 Rainbow Crafts Company created, manufactured, and marketed Play-Doh, an elastic, reusable modeling clay. Though they existed only eight years and manufactured only Play-Doh, their product is now played with by children in 75 countries worldwide.1

The beginnings of Rainbow Crafts Company involved Cleo McVicker, the failing Cincinnati soap company Kutol Products, and coal furnaces. In 1927 Cleo was sent to shut down Kutol but convinced the Chicago parent company to let him turn the company around. He hired his brother, N.W. McVicker as plant manager and inventor, and he began selling soap and cleaning compounds. Six years later in 1933, Cleo contracted with the Kroger grocery chain to provide 15,000 cases of wallpaper cleaner – something they didn't yet know how to make.2 Wallpaper cleaner was necessary to clean the coal soot off of the non-washable wallpaper in use at the time.

N.W. figured out how to manufacture the elastic cleaning dough and they fulfilled the contract on time. The brothers succeeded in becoming one of the largest manufacturers of wallpaper cleaner over the next 20 years and eventually bought the company. However, Cleo was killed in a plane crash in 1949, and the market for wallpaper cleaner began to dry up due to both the electric, oil, or natural gas furnaces which replaced coal heating and the introduction of washable vinyl wallpaper.

After Cleo's death, his son Joseph (Joe) and son-in-law Bill Rhodenbaugh tried to revive Kutol Products. Their sister-in-law, Kay Zufall who ran a community nursery school in Bellevue, New York, read about using wallpaper cleaner to make inexpensive Christmas tree ornaments. She tried it out in her nursery school and found that the children loved shaping and playing with the dough. Kay thought the family might be interested in developing this new concept for the cleaner, and Joe flew out to check it out. He quickly realized that with minor alterations to the formula the wallpaper cleaner could become a non-toxic, non-staining modeling toy for children. Kay named it Play-Doh, N.W. reformatted the dough, and Joe began marketing their new product in the local schools and daycare centers.

The following year in 1956, Joe, Bill, and N.W. formed Rainbow Crafts Company as a subsidiary of Kutol Products. They originally sold 1.5 pound boxes of off-white Play-Doh but soon switched to gallon cans of red, yellow, and blue Play-Doh with colored lids to indicate the dough color. Primary colors were used because the children could mix them to make “any color in the rainbow” which was the inspiration behind the new company's name.

Because Rainbow Crafts didn't have the resources to buy television ad time, in 1957 Joe convinced Bob Keeshan, known as Captain Kangaroo, to feature Play-Doh on his television show for 2% of the sales. After that Miss Francis of DingDongSchool and RomperRoom also featured Play-Doh and the new product spread throughout the United States.

A limitation of the original Play-Doh formula was that it dried quickly and turned white. In 1957 Joe hired chemist Dr. Tien Liu to improve the formula to remedy these properties. By 1960 the new formula, which is still an industry secret, was completed. Joe and N.W. filed for a patent and established Rainbow Crafts Company as an independent entity. Bill became sole owner of Kutol Products, which continued to sell hand soaps and to package Play-Doh for Rainbow Crafts.3 Also that year the elf on the package was replaced with Play-Doh Pete, a boy with a beret4 and the Fun Factory accessory playset was introduced.5

With the patent still pending, Rainbow Crafts continued to market Play-Doh and in 1964 they expanded into England, France, and Italy. In January 1965 the patent was awarded, and General Mills offered $3 million for the company, which would now be equivalent to $18 million. Joe accepted and retired from the toy industry. Rainbow Crafts became a division of General Mills along with Kenner Products and Parker Brothers.

Within General Mills, Rainbow Crafts merged with Kenner Products in 1971. Kenner continued to market Play-Doh and in 1983 they added four new colors.6 Two years later General Mills spun-off both Kenner Products and Parker Brothers as Kenner Parker Toys Inc.7 which Tonka Corporation purchased in 1987. Four years later, in 1991, Hasbro acquired Tonka Corporation, including all rights to Play-Doh and Play-Doh accessories.8 Hasbro has continued to add accessories for Play-Doh play and to create dough versions that glow in the dark, glitter, or smell different from the original almond smell.

Play-Doh was inducted into the National Toy Hall of Fame in 19989 and September 16th is now celebrated as National Play-Doh Day.10