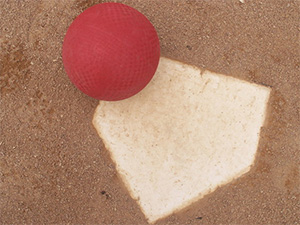 One of the most popular children’s games on the playground is kickball. Played with elements similar to baseball and soccer, kickball uses a field laid out like a baseball diamond with 4 bases and a rubber ball. The game is played by two teams who try to score more runs than their opponents by rounding the bases and crossing home plate as many times as possible after successfully kicking the ball into play.1

The invention of the game of kickball, originally called “kick baseball,” has been attributed to Nicholas C. Seuss, Supervisor of Cincinnati Park Playgrounds, in 1917. His original rules included two teams consisting of the kickers and the fielders and a basketball.2 As the game evolved through the 1920s and 1930s, soccer or volleyballs replaced the basketballs, and the fielders took on positions similar to baseball with a pitcher rolling the ball to the kicker, a catcher behind the plate, basemen, shortstops, and outfielders. Physical education instructors used the game of kickball to introduce the concepts of baseball to their students.3 By the 1950s the red rubber playground ball became the ball of choice for recess pickup games of kickball. Teams could consist of as many players as wanting to play divided into an equal number of players on each team, although the game is best played with teams of 8 to 11 players. Each kicker has three chances to kick the ball and there are three outs to an inning.4

The ball is pitched to the kicker from the pitching mound in the center of the infield. The ball must roll on the ground when crossing the plate, and the strike zone is one foot inside and outside of home plate. The kicker must use his foot or leg to kick the ball. All kicks must be made behind home plate or while stepping on home plate. The kicker is not allowed to bunt the ball, and it is called an out if the kicker does not kick the ball fully extending his leg. The kicker is also called out if his kicked ball is caught in the air even if it is in foul territory.

After three strikes, the kicker is out. A strike is a pitch inside the kick zone that isn’t kicked, an attempted kick that’s missed no matter whether it was inside or outside the strike zone, or a foul ball that is kicked that lands in foul territory or goes out of bounds before passing first or third base that isn’t touched by any player.

The kicker is allowed to go to first base after 3 balls. A ball is called when a pitch is outside the strike zone and the kicker doesn’t try to kick it, a pitched ball bounces across home plate, or any fielder including the pitcher advances toward home plate before the ball is kicked.5

The rules for the runners deviate from baseball in several ways. Runners must stay within baselines, but they are not permitted to slide into bases or run into fielders. Fielders must stay out of the baseline, and if they interfere with the runner, the runner is safe at the base he is running toward. Runners are not allowed to leave their base before the ball is kicked. If they are off base before the ball is kicked, they are considered out. A runner is out if he is hit by a kicked ball. Runners must tag up after a fly ball is caught before advancing to the next base. Runners may overrun first base as long as they turn toward foul territory once they pass the base. Other bases overrun may allow the runner to be tagged out by a defender with the ball. If the ball is overthrown, the runner may advance only one base. A runner may not overtake and pass a runner on the bases ahead of him. When the pitcher has control of the ball and is standing on the mound, all runners must stop advancing.

A team scores a point every time a player touches all the bases and crosses home plate. A game usually last six innings, with each inning divided into a top and bottom half giving each team a turn to kick. After three outs, the kicking team moves to the field giving their opponents the opportunity to kick. If after six innings the score is tied, additional full innings can be played to determine the winner.6

As with other team sports, the simple game of kickball provides an opportunity for exercise while promoting cooperative play and teamwork among its players. It is a fast-paced, fun game, and it has developed into a huge social sport for adults who at one time played the game as children. Since the late 1990s, adult kickball associations and leagues have been organized throughout the U.S. and have gained in popularity.7