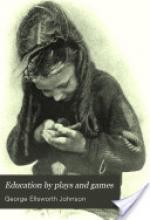 George E. Johnson wrote Education By Plays and Games in 1907 to “help promote a wider and higher appreciation of play and of its value in education, and add somewhat to the sum of child happiness in the world.”1 President G. Stanley Hall of Clark University in Worcester, Massachusetts recommended the book to parents, intelligent teachers, and open-minded educational leaders because “by turning on the great motive power of the play instinct, (they will) give increased efficiency to instruction and to learning.”2

While a student at Clark University in the early 1890s, Johnson spent a year gathering nearly a thousand “of the most important and widely diffused” plays and games which he then winnowed down to the ones “most representative and important.”3 He noted that while the “variations of children's plays are well-nigh infinite, yet the essential features are few” and he felt the ones included were adequate to cover “the whole field many times.”4

These play activities were then organized by physical and mental requirements for each age and developmental stage and then described briefly and sufficiently in order to be the “groundwork upon which the ingenuity of the teacher can build to suit her peculiar need.”5 The original study findings were published in the Pedagogical Seminary in 1894.

Education By Plays and Games is a revision of this study, in response to popular requests from teachers. By 1907 Johnson was Superintendent of the schools in Andover, Massachusetts and was able to supplement the earlier study with his own experience in integrating “portions of this choice repertory of plays and games to supplement and also to stimulate school studies by organizing playgrounds, clubs, rooms, hours, (and) courses.”6

However, Johnson cautioned that “Games and plays should rarely be dictated; they should often be suggested, sometimes taught, by the parent and teacher, but it is on the environment largely that we should place the stress of our efforts.”7 Part of this environment is the knowledge of the appropriate activities for the evolving child's development so that though “play involves the hardest of work” that “drudgery will be swallowed up in the interest, in the earnestness of the zealous soul.”8

Part I of Education By Plays and Games discusses the nature of play, the historical and current theories of play in education at that time, and an outline of the stages of childhood and how they correspond to children's play. The balance of the book is then a detailed exploration of children and play for each of these five stages, encompassing children from birth through 15 years old.

This biological belief, in Johnson's opinion, was being forgotten in education and he felt that the school systems had “snubbed nature.” He felt that the “more successfully the child passes through the biological stages of development, the more complete will he be as a man” and that play was the best way for children to develop.10 In quoting A.F. Chamberlain, Johnson stated, “play is concerned with everything; emotions, feelings, acts, thoughts, imaginings, speech, - all begin their career in its subtle shaping influence.”11

Exploring play in relation to instinct and work, Johnson declared that children's play impulses “have one all-important office of giving rise to habits and permanent interests” including the habit of work, in fact, “the opportunity of play is the opportunity of work.”12

Beginning with the Greeks, Johnson outlined the theories of play and education through the centuries, including the theories and practices of Rabelais, Erasmus, Comenius, the Jesuits, Fenelon, Locke, Basedow, Wolke, Montaigne, Richter, and Guts Muths. He especially accredited Johann Heinrich Pestalozzi and Friedrich Froebel for shaping current play and education theories.

Johnson concluded this historical summary by declaring that “No one now questions that play educates” and then he asked the question “Can play be engrafted successfully into our system of education and still be play?”13 For him the answer was yes, and he extensively illustrated how through the example of the Elm Street School in New York City and through his own experiences with the Andover Play School.

These practical examples are then followed by an in depth outline of each of the five periods of child evolution and development: period one from birth to 3 years old, period two from 4 to 6 years old, period three from 7 to 9 years old, period four from 10 to 12 years old, and period five from 13 to 15 years old. Each period's discussion includes the “essential characteristics” of the children, “apparatus and toys” that are appropriate, types of play activities, and descriptions of games. Beginning in period three, Johnson included extensive ideas for incorporating play into the educational curriculum for arithmetic, nature study, geography, language arts, music, and drawing.

A topical bibliography and index concludes Education By Plays and Games, a reference that President Hall called “a new book with a field of its own.”14 The significance of this field of play and education is underscored by the opening quote by Schiller, “Man plays only where he is a human being in the fullest sense of the word, and he has reached full humanity only when he plays.”15