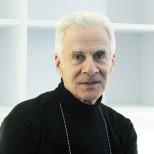 Once known as one of the “Young Turks of radical urban playground design,"1 Richard Dattner is an architect who has been leading the innovative curve of architectural design for both playscapes and public buildings for over 50 years. His approach can be seen in the core values of his New York City firm, “We believe that each project must belong to its place and time, tread lightly on the environment and inspire its users….”2

Richard was born in Bielsko, Poland in 1937, but left occupied Poland with his parents in 1940. They lived in Italy, then in Cuba, and eventually settled in the United States. Later on, Richard’s fluency in Spanish would help him as he worked with parents and children in different communities within New York City.

While Richard was studying at the Architectural Association of London, he met and befriended the landscape designer Lady Allen of Hurtwood, who was a prominent proponent of the “junk” and “rubble” adventure playgrounds in post-war Britain and Scandinavia. These playgrounds would become one of the main influences of his urban playscape designs.

Back in the United States, Richard earned a bachelor’s degree from Massachusetts Institute of Technology (MIT). Over the years he has taught at Cooper Union, City College of New York, and the University of Wisconsin. He has also lectured at Columbia University, Princeton University, Cornell University, and his alma mater MIT.3

During this time, Richard became aware of the work of the sculptor Isamu Noguchi, who had been proposing sculptural playground designs that included abstract shapes as well as mounds, craters, and peaks molded from the earth. The playgrounds proposed by Isamu in the 1930s, 1940s, and 1950s in New York City were scorned by the NYC Parks Commissioner Robert Moses.4 As Commissioner, he had spread playgrounds widely over the city for 26 years, but they were only of the slide, swing, seesaw, and asphalt variety.

Though Richard didn’t participate in the Battle of Central Park that happened in 1956, he did directly benefit and learn from it. In April, a mother found out that their playground was going to be bulldozed to make more parking, and the baby carriage brigade gathered to stare down the construction crews. Bulldozing the trees during the night eventually lost the battle for Robert Moses.5 Four years later he was replaced as commissioner.

In 1966, Park Commissioner Thomas Hoving and his successor Commissioner August Heckscher began promoting a new breed of park designs.6 Consequently, Richard was commissioned to redesign five of Central Park’s “necklace” parks that spanned the periphery of the park.

Two years earlier Richard had formed the Richard Dattner & Partners architecture firm with 25 architects focusing on a wide range of civic and corporate clients. Over the years the firm has grown to have nine principals (with Richard being one of them) who collaboratively lead the firm. They are assisted by assistant principals, senior associates, and associates.7

The other “Young Turk” of the time was M. Paul Friedberg, who was also one of the first architects to utilize the concept of linked or continuous play.8 Both Paul and Richard believed in connecting imaginative play, exploration, and the development of a child’s mind and body through play.

Paul turned his focus on the public housing areas beginning in 1966 with the Jacob Riis housing plaza, which he redesigned with fountains, a garden, an amphitheater, and a play area that included an igloo, tunnels, ladders, pyramid, maze, wood-timber area, and a vast area of sand.9

Meanwhile, Richard was working with the community to design an adventure playground at that old protest site of 67th and Central Park West. While the playground was funded largely by the Lauder Foundation, he made sure the community was involved in fundraising, in design workshops, and in hiring a playmate to oversee play during the day.10

The resulting adventure playground included interlocking modular panels for constructive play, toys, books, and art supplies. Sand areas, water play areas, tunnels, pyramid slides, tree houses, climbing poles, mounds, peaks, and a jungle gym were also available for experiences that were largely under the control of the child. The playspace was a success with the children, and Richard went on to design the Ancient Play Garden, the Hecksher Playground, the 71st Street Playground, and the Water Playground.11

During this time, Richard wrote Design for Play (1969), which presented his beliefs about play spaces and their role in transmitting cultural values and facilitating children’s development and learning. He declared that “play is a child’s way of learning” and that playscapes are needed to “give the children the maximum range of experience, and to allow them so far as possible to control it.”12 Design for Play also chronicled the development of the adventure playground and highlighted other promising playscape designs.

Unfortunately, these playscapes were expensive to maintain and staff, and the funds soon dried up. They also became a casualty of liability fears over the risks inherent in their play features and of being out of compliance with the new federal safety codes. By 1995, there were plans to raze the 67th Street playground and four other playscapes, but again a protest was raised by neighborhood groups and the Landmarks Preservation Commission. The city compromised by allowing Richard to supervise code upgrades and facelifts for these playscapes.13

While Richard Dattner & Partners has earned more than 100 design awards since 1964, Richard has also been personally recognized. In 1992, he received the Medal of Honor from the American Institute of Architects of New York, and two years later he received the Thomas Jefferson Award from the National American Institute of Architects for “his significant contributions to public architecture.”14

Richard published his second book in 1995, Civic Architecture – the New Public Infrastructure, in which he illustrated a new planning and designing process for the public sector.

One of his civic designs that won many awards and was featured on the cover of the March 2016 Architectural Record was his Spring Street Salt Shed project for the New York City Department of Sanitation. This striking cubic design holds 5000 tons of salt in a NYC neighborhood.15

Also in 2016, Richard redesigned his 1960s PlayCubes in conjunction with the commercial playground equipment company Playworld. The cubes’ open geometric design allows challenging, yet undefined climbing paths to encourage exploration. The PlayCubes were redesigned in tough rotational molding with openings on all 14 faces that allow for a myriad of combinations. In December of that year the PlayCubes were named an Architectural Record’s Product of the Year.16