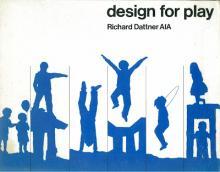 Richard Dattner wrote Design for Play, an illustrated book of play spaces and philosophies which create an “environment where play, learning, and the human spirit are nurtured.”1 Written in 1969, Richard first explores the philosophy of play, the social importance of play, and the psychology of play before discussing the challenges of designing for play for all children and in a variety of spaces. To illustrate these principles Richard then details the design and development of the Adventure Playground in Central Park in New York City for which he was the architect and highlights recent playgrounds with promising designs.

Acknowledging that play is a necessity for children, Richard defines play as a “condition of freedom, because it is above all doing what you want to do, when and where you want to do it.”2 He believes that it is the process of playing and not an end product that produces the internal satisfaction and developmental growth for children. In Design for Play he contrasts these concepts of play with the adult concepts of work, noting their crucial differences and purposes.

Socially, Richard explains through an example of French and American play habits how play transmits the values of a culture in unconscious ways and thus prepares children to accept their adult roles in that culture. He believes that “Children learn the rules of the adult world they will inhabit from the rules of their play as children. Both the best and the worst aspects of a society are first learned in play.”3

In addition to social conditioning, Richard explains that play is how children develop their intelligence, for “play is a child's way of learning.'”4 After giving background on the “heredity-environment” continuum in psychology, Richard extensively highlights Jean Piaget's stages of childhood development and how each related to the play needs of a child. Each of the five developmental phases is discussed in terms of corresponding playground designs that will facilitate learning at that stage in childhood.

In Design for Play, Richard laments the prevalent “asphalt desert” playgrounds which teach children “that the man-made world is dull, ugly, and dangerous, and empty of sensuous satisfactions.”5 Further, as a play space designer, he feels that “the environment for play must be rich in experience, and it must be, to a significant extent, under the control of the child. It must allow each child to exercise choice and to grow, safely, at his own rate.”6

In explaining the challenges of designing play spaces, Richard notes the key players of the design process, how much they are involved at that time, and the needs of each group. For example, children are key players which are not typically very involved in the designing of their playgrounds. Conversely, city administrators are heavily involved in the decision making about playgrounds they will never use. Parents and other adults in the community are also involved, though in relatively minor roles.

As a result playgrounds have often been built with largely maintenance free swings, slides, and see-saws atop asphalt. The children soon exhaust normal play behaviors in these play areas and move on to inventive play games with increased injury risks. After exhausting those creative avenues for play they turn to “games of destruction” to express their ingenuity and anger.7 The children's needs for sensory experiences, control over their environment, graduated challenges for learning and developing intelligence, activity choices that preserve their play freedoms, basic structures that allow fantasy role-playing, and a space of their own separated from controlling parents or adults8 were largely unknown or ignored in the face of the administrator's realities of cost and budgets. Richard's solution is to take the longer vision of “cost per use,” postulating the greater expense of relatively inexpensive, but empty, playgrounds vs. the more expensive child oriented playgrounds crowded with children and families.9

When observing children as they play, Richard notes they “want to create their own kind of order based on criteria quite different from those of adults.”10 The key design elements he explores are water play, the use of junk materials, and dirt. He champions the European adventure playgrounds that “furnish a site, building materials, water, a leader to watch over things and offer help when it is needed, and nothing more.”11 In these play spaces the children have rich sensory experiences and a safe environment to control their experience, i.e. to build, move, rearrange, carry, throw, float, dunk, collect, burrow into, and splash, to name a few.12

To illustrate these principles of child-oriented play, Richard gives firsthand experience in designing, developing community involvement, funding, building, maintaining, and providing supervision of the Adventure Playground in Central Park, including a frank assessment of the results. Other emerging play space designs and play space options are also detailed with pictures, descriptions, and sketches.

A separate chapter is dedicated to the special play design needs for children with disabilities. While he maintains that these children play in nearly identical ways of other children, they have particular design needs for facilitating their play and development. Richard discusses the playground designs needed for children with challenges that may be physical, emotional, and cognitive. Once again, for all children, he advocates designs that “give the children the maximum range of experience, and to allow them so far as possible to control it.”13