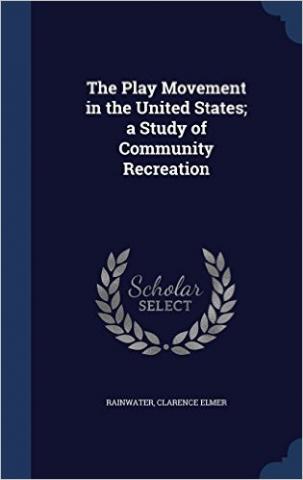 At the time of his writing Dr. Rainwater was Assistant Professor of Sociology at the University of Southern California. He had formerly been an Instructor in Playground Administration at the University of Chicago and the American College of Physical Education. He had also been Director of Hamilton Park Playground and Recreation Center, South Park System, in Chicago, Illinois from 1910 to 1917.

Dr. Rainwater defines the concept of a movement in the Introduction as having four characteristics common to movement:

Further in the Introduction, he investigates the many definitions of play proposed by a number of play theorists and concludes with this definition he used for this study: “a mode of human behavior, either individual or collective, involving pleasurable activity of any kind not undertaken for the sake of a reward beyond itself and performed during any age period of the individual, the particular action being determined at a given time by the somatic structure and social attitudes of the agent in conjunction with the life of the group or groups of which he is a member.”1

As urbanization and immigration increased in the latter part of the nineteenth century, the result was a rapid disorganization of children’s play in urban communities as well as in rural communities with their subsequent isolation and lack of physical facilities and social organization. Dr. Rainwater points out the positive effects of the play movement as it evolved with the organization of social activities in the sand gardens and model playgrounds; the creation of recreation, social, and community centers; the community music, drama, pageantry, municipal theaters, and orchestra events; and the community organization and service that resulted.

In Chapter II. The Origin of the Play Movement, Dr. Rainwater describes seven incidents suggested by others as the beginning of the play movement, which include the first mention of a provision for play in a Boston commons in 1634, early outdoor gymnasiums during 1821-1830, an outdoor school playground in 1868, and towns where land was set aside for play in the late 1800s. However, these didn’t qualify as beginning the play movement in the author’s estimation, because they did not promote or further subsequent actions. Dr. Rainwater concludes that the play movement resulted from the sand pile experiment in Boston in 1885 that resulted in a growth in sand gardens in the years that followed and spread to other cities.

The sand gardens contained areas for sand play as well as often having swings, seesaws, blocks, and other loose parts for play. His analysis of the structure of the sand garden stage from 1885-1895 had the following characteristics: provision only for children of pre-adolescent age; maintenance during the summer vacation period only; operation for only a portion of the day; equipment for outdoor uses only which limited service to favorable climatic conditions; location in densely populated sections of the city; support by philanthropic societies or individuals; activities including both free and directed play; and the motive primarily to keep children away from danger incident to play in the streets. There were three common explanations to the development of the concept of the sand gardens: the belief that street play was dangerous; unsupervised children were noisy, annoying, and often engaged in destroying property and injuring one another; and the congested city life promoted delinquent behavior in children.

The model playground stage from 1895-1900 saw the introduction of space designated for team sports of baseball and handball into the play areas in addition to the sand gardens and gymnasium equipment. During this stage four conclusions were reached: that play has an educational value as well as a recreational or amusement benefit to the participant; that facilities for youth as well as children should be provided; that provision for play should be made throughout the year; and that provision for play must be made by public, not philanthropic resources.

The third stage in the evolution of the play movement in the United States is the small park stage from 1900-1905. The construction of small parks and squares varied in size from three to ten acres with trees, shrubbery, and lawns, and they were generally equipped with outdoor gymnastic apparatus, playground equipment, ball diamonds, athletic fields, public restrooms and baths, and occasionally pavilions. These small parks resulted from the belief that public parks should be open to the play and recreational uses of the people; that their number and area should be adequate and their location accessible to the homes of the city; that playgrounds should be provided at least in part by municipal support and control; and that playgrounds should be attractive by virtue of the shade, lawns, flowers, and play apparatus.

A turning point in the play movement was seen with the fourth stage of 1905-1912, the recreation center stage. The recreation centers in the public parks and the social centers in the schools made provision for all ages to play throughout the year in indoor and outdoor activities. Adding to the physical play of the earlier stages were three other types of activities: the social play that included parties, dances, and clubs; the aesthetic activities of storytelling, dramatics, choral, and instrumental musical programs; and the civic activities of public lectures, health exhibits, and the holding of elections.

The civic art and welfare stage of 1912-1914 developed from the idea that beyond providing playgrounds and recreational facilities for the general public there should also be provision for raising the standards of the popular amusements of the day in music, dance, festivals, and pageants based on the moral views of the day to provide wholesome play. This stage had three objectives: the desire to incorporate the dramatic, musical, and dancing arts to counteract the damaging influences of the commercialized theater and motion picture; the impulse to regulate, not destroy, the commercial amusements to conserve the social values’ potential in them; and the belief in the efficacy of citywide organization for the promotion of art.

The neighborhood organization stage of 1915-1918 resulted from the realization that the regulations and supervision of commercialized amusements was ineffectual to raise the moral standards of the public primarily because the groups were too large and the events too infrequent. Smaller neighborhoods rather than the cities were encouraged to participate in both the control and the support for play in the vicinities of their own homes. Decentralizing the administration of the recreation of the community allowed for more flexible programs, more frequent activities, and a greater number of centers. Self-government and self-support of their play activities promoted a greater sense of community.

With the mobilization of the military and naval forces at the beginning of World War I, cities near military bases increased greatly in population, and the need for larger facilities for leisure time activities brought the commercial service stage in 1918 and the years that followed. To provide wholesome recreation, the War Camp Community Service was organized with the approval of the Army and Navy Departments. The emphasis was on neighborhood participation, and the local camp towns were given the authority over the efforts to take care of the recreational needs of the armed forces in their areas. The activities included community singing, pageants, dances, block parties, athletic meets, motion pictures, artist recitals, game rooms, and home hospitality designed as a means of conserving the health and morale of the military troops. When the war ended, communities were encouraged to continue organizing opportunities to further promote recreational activities.

In Chapter IV. The Transitions in the Policy and Activities of the Play Movement, the author describes the changes in the methods of procedure which resulted in an evolution in the play movement that became the various stages. He identified nine transitions:

Feeling an analysis of a movement is incomplete if its tendencies are not disclosed, Chapter V. The Trend of the Stages and the Transitions in the Play Movement addresses the trends seen as the result of the evolution of the play movement. Dr. Rainwater proposes five trends in the structure and concept of function: group sanction of the evolving changes; physical accompaniments of the play activities; historical continuity in the communities’ beliefs, traditions, and sentiments; increasing organization involving specialization and differentiation in function; and the relative permanency of the adjustments.

Dr. Rainwater summarizes his findings in Chapter VI. Conclusion. The Appendix gives his sources and bibliography as well as other helpful information particularly for recreation departments from his experience as Director of Hamilton Park Playground and Recreation Center.