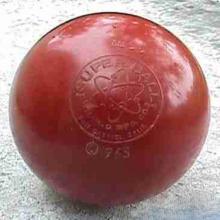 The SuperBall is a small synthetic rubber ball that has the ability to bounce higher and longer than ordinary bouncing balls. When the SuperBall was introduced in the summer of 1965, it became an instant hit with children and adults alike who were fascinated with its amazing properties. More than 20 million SuperBalls were sold in the 1960s alone, and it was listed on the All-TIME 100 Greatest Toys list compiled by Time Magazine.1

A California chemical engineer, Norman Stingley, was experimenting with a synthetic rubber material in his spare time. When he compressed the material under 3,500 pounds of pressure per square inch, the result was a ball with unprecedented resilience. He offered his discovery to his employer, Bettis Rubber Company of Whittier, California, but they weren’t interested in developing the product. The early version of the ball tended to fall apart quickly, and they felt the product would not be marketable.2

The founders of WHAM-O, Arthur “Spud” Melin and Richard Knerr, had successfully launched several popular fads, including the Frisbee and the Hula Hoop, and they quickly were on board with the amazing discovery.3 After several months of development, they finally produced a ball that held up with normal use, although it could still break apart when smashed against rough surfaces. Naming it the SuperBall, WHAM-O introduced it with a blockbuster promotional campaign, and the ball quickly became the world’s best-selling bouncy ball.

WHAM-O claimed that the SuperBall had 92 percent resilience, which was nearly three times that of a tennis ball, and that it would bounce for about a minute when dropped from a short distance. If dropped from shoulder height, the ball will nearly return to the same height. When the ball is thrown down with some force, it can leap over a three-story building and continue to bounce for quite some time. Throwing the ball against a wall with a spin on the throw can actually cause the ball to reverse spin and hit the wall four or five times.

The synthetic compound used to make the SuperBall was called Zectron. The patent for the SuperBall that was issued in March of 1966 revealed that the primary element was polybutadiene with smaller amounts of sulfur to reinforce the material and serve as a vulcanizing agent. The patent stated that the balls are molded under 1,000 pounds of pressure per square inch at a temperature of about 320 degrees Fahrenheit.4