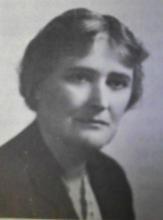 Early in the twentieth century, Josephine D. Randall was one of the first women to direct a municipal playground department and a major recreation department. Over twenty five years she led the San Francisco Recreation Department from inception to being a national noteworthy example of quality. Josephine was the first woman to become a Fellow of the American Recreation Society.1 She also received an honorary Doctorate from the University of California in 1948.2

After earning a bachelors and masters degree in zoology from Stanford University in Northern California, Josephine was first involved with settlement work and then assisted in the public health field. She began her career in recreation administration by becoming the director of playgrounds for the city of San Diego in 1913.3 She also worked with the Girls' Division of War Camp Community Service as well as organizing one of the first Girl Scout troops and Camp Fire Girls programs.

The city of San Francisco was impressed with Josephine's broad knowledge of recreation, her abilities in training recreation leaders, and her effectiveness in directing the survey and producing the reports. In 1926, they named her their first Superintendent of the Recreation Department, a position she held for 25 years.7

Josephine created a community recreation program that included drama groups, music clubs, dance programs, a community orchestra, and recreation for commercial and industrial workers, including the 300,000 war industry workers flooding into San Francisco during World War II.8 She assisted in operating the Hospitality House for military personnel, publishing a guide “Something to Do in San Francisco,” and creating recreation programs that involved both the military and civilians.

She also initiated recreation programs in public housing developments and initiated a program successful in reducing juvenile delinquency. The latter began in 1930 and involved “workers-at-large” who befriended and guided boys and gangs to available recreation outlets.9 This program was overseen by A Central Coordinating Council which included Josephine, the Chief of Police, the Chief Probation Officer, and the Superintendent of Schools.

For her extensive staff, Josephine provided a course in job relations which kept them effective and informed. She felt that “No occupation or field of service offers greater interest or more day-to-day thrilling experiences than does that of recreation; for recreation is a wide-open field for exploration for the pioneer, the trail blazer, the experimenter. There is no set pattern to be followed, and the unexpected is ever happening….  In whatever branch of recreation a leader may elect to specialize, his influence will be felt in proportion to the service he renders – he must feel that it is worth the very best that he can give.”10

One such opportunity which Josephine took advantage of was the Golden Gate Exposition in 1939-1940 on Treasure Island. Through exhibits, she was able to demonstrate quality recreation not only to Americans but to world visitors as well. She had already shown this in San Francisco by expanding their 22 playgrounds to more than 100 recreational facilities with a broad scope of activities and audiences. The Stern Grove which hosted music, drama, and dance programs and the Chinese Playground in Chinatown were two examples of recreation facilities she established. She also took a worldwide view by presenting recreational programs that featured different cultures’ games, customs, arts and crafts, songs, dances, and folk lore.

As a botanist, Josephine's vision was to establish a children's museum that would create, “a spot in the heart of the city where young people could spend a day in the country.”11 She wanted to “help young people realize the beauties of nature, the important facts of history, the achievements of man; to illustrate the principles of science, and to provide opportunity for creative education through various activities and hobbies.”12

In 1935, she found a partner that shared this vision: Bert Walker, a naturalist who was operating Camp Mather in the High Sierras. Bert joined the San Francisco Recreation Department as a gardener and put together collections and exhibits for the Junior Recreation Museum. Located in an abandoned county jail, the museum opened in 1937. Later it was moved to the empty State Relief Organization building on Ocean Avenue.13

In the beginning, the museum featured field trips to collect and observe nature; study groups in biology, geology, and botany; nature trails and gardens; nature arts and crafts; a junior Audubon club; and the production of a monthly bulletin. Photography equipment and a theater for slide presentations and sound motion pictures were also available.14

After the Depression and World War II had slowed the development of recreational properties, Josephine led the Citizen's Committee to pass a $12,000,000 Master Building Plan for Youth, which passed by a 3.5 to 1 vote in 1947.15 Some of the projects under this plan included a beach park, a recreation arts building, camp sites, and four enclosed swimming pools.

A major project funded by the Master Building Plan was the new junior museum, a three story brick, glass, and stucco building which was built on 16 acres on “Rocky Hill,” an abandoned quarry and brick factory in Corona Heights.16 The new museum was dedicated in 1951 and was renamed the Josephine D. Randall Junior Museum, now known as the Randall Museum. It includes arts and crafts shops and studios, a live animal room, gardens, exhibits, a theater, and classrooms.

The same year that the museum was dedicated and named after Josephine, she resigned when they consolidated the Recreation and Park Departments. She opposed the consolidation, feeling it wasn't the best move for the Recreation Department.17 After retiring, she toured Europe for a year as a goodwill ambassador for the California Recreation Society. She later directed a study of recreation space standards, which led to the booklet “Planning for Recreation Parks in California.” She was also a member of the California Youth Committee and the Research Committee of the National Recreation Association.