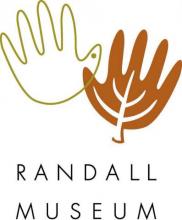 The Josephine D. Randall Junior Museum, known as the Randall Museum, is an interactive art and science museum that is run by the San Francisco Recreation and Park Department. Located on 16 acres that overlook San Francisco, they strive to inspire creativity, curiosity, and appreciation of the world cultures and environment.1

As director of the San Francisco Recreation Department, Josephine Randall had a desire to establish a children's museum that would create “a spot in the heart of the city where young people could spend a day in the country.”2 She wanted to “help young people realize the beauties of nature, the important facts of history, the achievements of man; to illustrate the principles of science; and to provide opportunity for creative education through various activities and hobbies.”3

In 1935, she began working with Bert Walker, a naturalist who was operating Camp Mather in the High Sierras. After Bert joined the Recreation Department full time, he put together collections and exhibits for the Junior Recreation Museum, which opened in 1937. Initially located in an abandoned county jail, the museum was later moved to the empty State Relief Organization building on Ocean Avenue.4

The museum, which Josephine and Bert organized, featured field trips to collect and observe nature; study groups in biology, geology, and botany; nature trails and gardens; nature arts and crafts; a junior Audubon club; photography equipment and instruction; and the production of a monthly bulletin. Exhibits, including terrariums and aquariums, were also loaned to playgrounds.5

After the Depression and World War II had slowed the recreational development in San Francisco, Josephine led the Citizen's Committee to pass a $12,000,000 Master Building Plan for Youth, which passed by a 3.5 to 1 vote in 1947.6 A major project funded by the Plan was a new home for the museum. “Rocky Hill” in Corona Heights was chosen for its rough terrain and unique rock formations. What once housed a quarry and brick factory soon featured a three story brick, glass, and stucco museum which overlooked the center of the city.7

The new museum was dedicated in 1951 and was renamed the Josephine D. Randall Junior Museum. It included rooms for nature study; crafts such as weaving, woodworking, ceramics, model making, and lapidary work; a photographic laboratory and printing room; and a 240-seat theater “equipped for the projection of slides and sound motion pictures.”8 They also featured programs and tours for school classes, youth groups, and playground children.

To augment the funding received from the city of San Francisco, a private, nonprofit Randall Museum Friends was organized in 1954. They raise funds to cover nearly one third of the museum's program funding.9 The Randall programs have grown to include summer camps, live animal exhibits, a model railroad and train exhibit, an earthquake exhibit, ocean and wind exhibits, science field trips, and Family Festivals.

The over 40 year old Randall Theater was remodeled in 1994 and hosts performances by the Young People's Teen Musical Theater and the Natural History Lecture Series, Cine/Club which screens classic films for teens, and a host of community groups and events. The outdoor aspects of the Randall were updated in 2003 with the Outdoor Learning Environment that includes an observation deck, the lawns, an art patio, and a native plant garden.10 The $2.3 million required for the project was raised through funds from Proposition A, the Open Space Fund (Prop C), and support from the Randall Museum Friends.

In 2011, the California Department of Parks and Recreation awarded the Randall Museum a Nature Education Facilities grant of nearly $5.5 million to make site improvements.11 The grant, funded by Proposition 84 Safe Drinking Water Bond Act of 2006, will nearly double the museum's program space by constructing natural habitats for their live animal exhibits with study stations for students, adding an exhibit lobby for geological and zoological collections, and building a hands-on science laboratory.