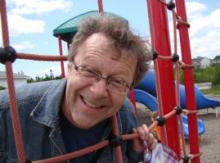 Written by Alex Smith, PlayGroundology is a blog that “scours the web for all things bright, beautiful and occasionally tarnished about the world of playgrounds.” Unique and interesting playgrounds, both old and new, are highlighted as well as posts about design, art, history, advocacy groups, and civic engagement as they relate to playgrounds.1

Calling himself a “PlayGroundologist in training,” Alex currently works as a public affairs professional with the federal government at his office in Halifax, Nova Scotia. His interest in playgrounds was inspired by his young children and his father-in-law, a retired public school physical education teacher, who encouraged spending time at local playgrounds when the family visited him in Quebec.

In June 2009, Alex began writing PlayGround Chronicles, a blog that reviews and promotes the playgrounds in the Halifax area. With over 300 playgrounds to visit, Alex photographs and maps individual playgrounds and includes a blog post about each one highlighting the great features as well as the concerns. In January 2010, PlayGroundology got its start, and Alex continues to write for both playground blogs.2

PlayGroundology has a feature called ScreenShot Mondays where Alex suggests a website that focuses on playgrounds or play for his readers to explore. Some of the “cyberspots” he has highlighted have included The Sustainable Sites Initiative, Active Kids Club, EarthPlay, Pop-Up Adventure Play, and The Play & Playground Encyclopedia.

Alex writes about playgrounds from around the world and includes beautiful photography with his interesting descriptions. Concrete sculpted art playgrounds from France, vintage photographs and video clips of adventure playgrounds in England, and unique designs of new playground equipment with features such as musical swings are samplings of the varied subjects he brings to his readers.

Alex is particularly interested in the intersection of the worlds of art and play. He sees beauty and form helping to nourish children’s imaginations as they test their physical abilities and build social skills. PlayGroundology also curates galleries of photos from around the world on its companion Flickr site.

Alex notes that, “PlayGroundology would not be possible without the great sharing house of the interweb. I love to source stories to share with readers. Along the way, I’ve met a lot of wonderful people doing it all for the kids—landscape architects, designers, photographers, sculptors, play theorists, and advocates to name just a few.”3