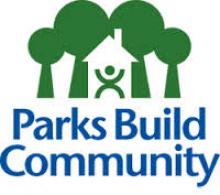 Parks Build Community is a national initiative that promotes the value of parks and recreation on the health and vitality of communities across America. National Recreation and Park Association (NRPA) launched the Parks Build Community initiative in 2009 with plans to revitalize Washington D.C.'s Marvin Gaye Park. Their mission is to select a park in an underserved area and transform it into a thriving gathering place for youth and adults.1

In 2001, Washington Parks & People, George Mason University, and the Washington, D.C. Department of Parks and Recreation began revitalizing what was originally the Watts Branch Park in Northeast Washington, D.C. For five years volunteers cleaned out the trash, abandoned cars, and hypodermic needles; planted native trees; and renamed the park the Marvin Gaye Park on April 2, 2006.2 The city assisted the revitalization in 2008 by closing a nearby methadone clinic, which had attracted drug addicts.

Parks Build Community began their involvement with the Marvin Gaye Park in 2009 by installing a “state-of-the-art” playground with donations from Playworld Systems, KOMPAN, PlayCore, Landscape Structures, and Surface America. This play space serves the children of the 600 families that live near the long municipal park that includes the Watts Branch stream.3

As part of their goal to improve the health and wellness of the local youth population, Parks Build Community also supported local programs for education and job training.4 Further plans included a mosaic honoring local heroes, a youth-run farmer's market, a Marvin Gaye Amphitheater, and 1.6 miles of hiker/biker trails.5

The Marvin Gaye Park was dedicated in August of 2009. The National Recreation and Park Association commissioned a study to evaluate how the rebuilt park affected the youth in that area. They found that the revitalized park had a “major impact on the amount and types of physical activity among the local youth population.”6 Based on this experience, the NRPA created a handbook for rejuvenating neighborhoods through revitalizing parks.

The Selena Butler Park is a six acre park surrounded by new developments in downtown Atlanta and close to historic civil rights sites. Since 2005 the park had been underfunded and unkempt. After further destruction by a tornado in 2008, the park was closed and became a magnet for drug users.

New plans for the park included a playground, a plaza, a picnic area and grill, an outdoor basketball court, a tennis court renovation, a community garden, outdoor art, and a multi-purpose field.8