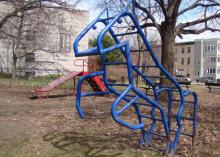 The novelty playground era is the time period in playground history when play spaces departed from the typical basic metal play equipment, concrete pipe designs, and asphalt surfacing of the early 20th century to designs with bright colors and thematic, sculptured play structures. Sometimes known as the “age of fantasy,”1 the novelty era was an attempt to promote dramatic play, encourage imagination, and promote learning for the maturing of post-World War II baby boomers of the 1950s and 1960s.2

Some examples of the novelty era playgrounds include the Dennis the Menace playground in Monterey, California, the nautical playground in East Orange, New Jersey, and the western theme villages in Los Angeles, California.3 In the 1960s after Sputnik, rocket play structures became a common addition to playgrounds during this period. Also common were covered wagons, submarines, animals, domes, and geometric shapes.

Dr. Joe Frost has described the era as a time when the adult values of aesthetics, historical significance, manufacture feasibility, and physical fitness were emphasized in playground designs rather than child development needs.4 Lady Allen of Hurtwood agreed and characterized the novelty playgrounds as “over-elaborate, over-clever, too slick, (and) the pride of the architects.”5

Though the intention was to appeal to children's imagination, the fanciful play equipment was also “free standing, fixed, lifeless, and resistant to change, movement or action by children.”6 Dr. Frost's personal observation was that the children bypassed the artistic structures to slide down the nearby hillside on cardboard boxes.7

Research in recent decades contrasts the “closed-ended” realism exemplified by the novelty era and the “open-ended” abstractness of the modular equipment that began in the 1970s. These two options are portrayed by John Mason: “A cubby which can be a house one day and a fort the next day is far better than one which looks very much like a castle and wouldn't inspire the children to treat it as anything but a castle.”8

However, other research indicated that “more realistic props were important for 2- and 3-year olds, while 4-year olds like a mixture of realistic and non-realistic play objects and that 5 and 6 year olds preferred non-realistic play props.”9 These findings and the lure of new possibilities with modern plastic molding may be fueling the trend in the early 21st century to bring back thematic novelty era type play equipment.10