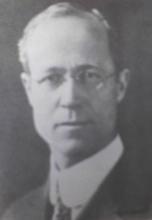 As a pioneer in the American play movement, Dr. Clark W. Hetherington was a philosopher, teacher, and physical education administrator at the university, state, and national levels. Dr. Hetherington believed that “Play is the central element in the scheme of human nature that makes volition possible... Without play man is inconceivable; play makes volition and rational living possible. There is no meaning to the phrase 'mere play,' for play is the most important activity in life.”1

Earning a bachelor’s degree in Education from Stanford University in 1895, Dr. Hetherington continued to assist in the university's Physical Training Department for the next year. He moved from Stanford, California to be the Director of Physical Training at the Whittier Reform School, which at that time was just outside of Los Angeles. For two years Dr. Hetherington, in the words of a contemporary Dr. George J. Fisher, “organized the play of the inmates, the first time such a thing had been dreamed of in a reformatory. His work had a profound effect both upon the boys and upon the institution.”2

While at Whittier, Dr. Hetherington studied the backgrounds of all the boys to discern what led to their being mandated to the reform school. He found that 80% of the inmates were there because of what he termed “the neglect of their play impulses.”3 The recreation program with trained leadership which he organized was deemed a constructive influence in both their moral and physical development.

In 1898, Dr. Hetherington moved east to Worcester, Massachusetts to become a Fellow and Assistant Professor in Psychology at Clark University. Two years later, Dr. Hetherington moved to Columbia, Missouri, where he became a Professor of Physical Education and Director of Athletics at the University of Missouri (MU). As MU's first athletic director, he organized a centralized athletics department that included all students through intercollegiate competitions, intramural recreation, and women's activities.4 He also was one of the founders of the Missouri Valley Conference division in 1907.

Dr. Hetherington was concerned with the then brutal sport of football. The New York Times reported that the 1905 football season had resulted in 19 athlete deaths and more than 200 injuries. Dr. Hetherington required that varsity athletes at MU pursue an academic program, maintain scholastic eligibility, be well trained, and remain unpaid as amateurs.5 The following year the Intercollegiate Athletics Association, later known as the National Collegiate Athletic Association (NCAA), was formed, and Dr. Hetherington was one of the executive members. That was also the year he made an unpopular decision to fire the beloved MU football coach for paying a player.

While in Columbia in 1908, Dr. Hetherington organized a statewide network of rural playgrounds with the goal of having “organized play in every town and rural school in the state.”6 Since 1906 he had been serving on the Board of Directors for the Playground Association of America, and in May of 1908 he had been appointed chairman of the Association's committee to create a training course for various levels of professional play leaders. The resulting Normal Course in Play contained three parts: a Normal Course for Professional Directors, an Institute Course in Play for summer school and temporary play facilitators, and a Course for Grade Teachers.

Believing that “the position of playground supervisor may be no less important than that of the superintendent of schools and that a playground system needs to be run with definite objectives just as a school system,” Dr. Hetherington led the committee in defining and setting standards for the different types of playgrounds, the hierarchy of play leaders, the qualifications of playground leadership, and the organization and content of adequate training courses for play professionals.7 By 1909, The Normal Course in Play was developed and published in the Recreation Congress Proceedings. Over the next 16 years the Course continued to be revised until its final form was published in 1925.

Dr. Hetherington was awarded the Joseph Fels Endowment in 1909 to promote recreation and educational athletics. With this fellowship of $5000 per year, he resigned as Athletics Director of MU and spent the next four years visiting 300 cities in 35 states surveying their recreational programs and needs. In this way he was also able to promote the adoption of The Normal Course in Play.

In the summer of 1913, Dr. Hetherington established the Demonstration Play School on the University of California, Berkeley campus. The school was a fusion of “the joyousness and dynamic power of play and the social purpose of education.”8 Children ages four through twelve years old were organized into four age groups with the older two age groups having separate classes for boys and girls. This Summer Play School was a balanced blending of physical, moral, and cultural education based around the basic types of child development activities such as environmental and nature, big-muscle, dramatic, rhythmic and musical, manipulating and manual, vocal and linguistic, social, and economic.

Dr. Hetherington believed that, “Play is Nature's method of education – it is identical with the child's spontaneous living.”9 He led the Summer Play School for four years, during which time he was also a Professor over training courses in physical education at the University of Wisconsin in Madison. Mrs. Hetherington continued what he had started and led the summer school for the next 17 years until 1934.

As the first Supervisor of Physical Education for the California's State Department of Education (1917-1921), Dr. Hetherington replaced the physical drills and exercises with “natural” activities that emphasized the development of character and physical abilities, sportsmanship, and “wholesome living.”10 To support these changes he wrote Manual in Physical Education for the Public Schools of the State of California (1918), which was used throughout California and many other states. When his plans to extend training to physical education workers was denied by the state, Dr. Hetherington resigned and taught for a year at the Institute of Educational Research at Teachers College, Columbia University in New York City.

The following year in 1924, Dr. Hetherington chaired the new Department of Physical Education in New York University's School of Education. During the four years he was there, he convinced the university to establish a summer camp and training center in Palisades Interstate Park to assist in preparing physical education and recreation leaders.

The last nine years of his professional career Dr. Hetherington was a professor at the school where he had begun his own training – at Stanford University. He taught in their Department of Hygiene and Physical Education until he retired in 1928 at the age of 68.

While Dr. Hetherington was in New York City, Howard S. Braucher, the executive secretary and a leader in the Playground Association of America, arranged for a three year grant for him to write a series of books which would include one on Character Education Through Play, on Leadership of Physical Education Activities, and one on The Nature and Function of Play. However, due to difficulties with his health, including problems with this eyesight, Dr. Hetherington did not complete any of these books.

Because Howard felt there was “no clearer thinker in the field,” he continued to encourage Dr. Hetherington to share his play concepts through writing after he moved to California. He felt that, “Few individuals in our generation have as keen an insight into the nature of man, the essential unity of the whole man, the necessity that the education of the mind and body should go hand in hand, as has Professor Hetherington.”11 Unfortunately, although it troubled him that physical education and play as education was not as widely accepted as he hoped, Dr. Hetherington did not leave his own books on the subject for future generations.

Besides being active in the Playground Association of America, Dr. Hetherington founded The American Academy of Physical Education and assisted in forming the Athletic Research Society, the Boy Scouts of America, and the National Amateur Athletic Federation. Additionally, he was instrumentally involved with the Council of the American Physical Education Association.12