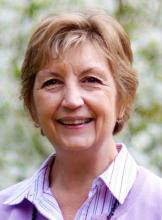 Dr. Nilda Cosco is a Research Associate Professor and an Education Specialist who is concerned with the impact of outdoor and built environments on the well being of children and their families. She believes that, “Outdoor play in nature is especially stimulating as nature is ever changing, highly sensory, and engaging...Long periods of engagement in freely chosen play activities not only supports attention restoration and creativity but the development of social skills and language, the opportunity of full immersion in the physical environment, and the unexplainable joy of being in touch with others.”1

Dr. Cosco, a native of Argentina, earned a degree in Educational Psychology from the Universidad del Salvador, in Buenos Aires, Argentina in 1975. While she was working as an educational psychologist in 1978, she furthered her training by studying Play Methods of Adults through the Estudio de Juego in Buenos Aires. After this, she worked as director of various preschools and kindergartens, which included establishing a teaching approach based on play at the OSECAC Social Welfare Organization Kindergarten.

With further training through a Group Coordinator Proficiency Course through Grupos in Buenos Aires in 1987, Dr. Cosco became the Program Coordinator/Trainer for the Association for Research & Development in Child Health (ACINDES) over the Educational Play Program for Children with Chronic Illnesses.

The following year in 1988, Dr. Cosco was the program coordinator over three different play projects: a community participation project to create a play space for low income children in a tenant house, the Plaza Alberdi playpark and resource center upgrade, and a national awareness campaign concerning the importance of play in children's development, which included assisting communities to develop play programs. Later, in 1993, Dr. Cosco received the Play Right Recognition Program Award from the IPA Innovative Communications Program for her “Right to Play in Big Cities” Awareness Campaign.

Traveling to the United States in 1989, Dr. Cosco completed the Lekotek Training Course at the National Lekotek Center in Evanston, Illinois. She then became the Director of the National Lekotek Center of Argentina in Buenos Aires. Lekotek Centers assist families of children with disabilities to learn to play together through monthly family play sessions. They also operate a loaning toy library so the families can continue to play together in their homes. The National Center coordinates program development, leadership training, fund raising, a central database, and building designs to facilitate play in local centers.

Moving to the United States in 1998, Dr. Cosco settled in Raleigh, North Carolina as an Educational Specialist and Consultant for MIG, Inc., a company that plans, designs, and sustains environments that support human development.3 During her two years with MIG, Dr. Cosco designed and conducted training courses on “play and learning for children with and without disabilities and children at risk.”4 She also consulted on the design of play spaces for day care centers, schools, zoos, museums, botanical gardens, and toy libraries.

In 2000, Dr. Cosco co-founded with Dr. Robin Moore the Natural Learning Initiative (NLI) at the College of Design, North Carolina State University (NCSU) in Raleigh.5 As an Education Specialist she shaped environmental education, training courses, and design programs concerning children's environments. She also assessed environment design for children with special needs and researched the affect of design on child development.

As her research on children's play environments continued with her resulting publications, Dr. Cosco studied Landscape Architecture at the Edinburgh College of Art in Edinburgh, Scotland and received her Doctorate in 2006.6 For the next year Dr. Cosco was the Coordinator of the Inclusive Design Initiative and the Director of the Center for Universal Design within the College of Design of NCSU.

Funded by the National Institute of Environmental Health Sciences (NIEHS), the National Science Foundation (NSF), and the Buffalo Hospital Foundation, Dr. Cosco's research focuses on “the impact of outdoor environments on health outcomes such as obesity, sedentary lifestyles, attention functioning, and well-being.”8 She believes that the design of children's play spaces is vital because, “It is through play that we share our abilities, make contact with our deepest self, and unleash our potential.”9