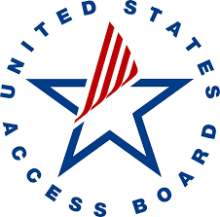 The U.S. Access Board, which was originally named the Architectural and Transportation Barriers Compliance Board, is an independent federal agency that promotes equality for people with disabilities. It works to accomplish its mission through leadership in accessible design and the development of accessibility guidelines and standards. Originally created in 1973 to ensure access to federally funded facilities, the Access Board is now a leading source of information on accessible design.

The Access Board has broadened its original scope to develop and maintain design criteria not only for the built environment but also to include transit vehicles, telecommunications equipment, medical diagnostic equipment, and information technology.  The Board also provides technical assistance and training on their accessibility requirements and on accessible design. It also enforces accessibility standards that cover federally funded facilities.

The structure of the Access Board is intended to function as a coordinating body among federal agencies and the public they represent, particularly those with disabilities. Twelve of its members are representatives from federal departments, while thirteen others are members of the public appointed by the President, a majority of whom must have a disability.1

Several different laws shape the work of the Board and its mission: The Americans with Disabilities Act (ADA) of 1990; the Architectural Barriers Act (ABA) of 1968; the Rehabilitation Act of 1973; and the Telecommunications Act of 1996.2

On August 12, 1968, Congress unanimously approved the Architectural Barriers Act, the first federal law to address accessibility, to make federal facilities accessible to people with disabilities. The intention of passing this law was to set an example to state and local governments and for private industry to include accessibility to their facilities as well.

The Access Board was created several years after the ABA became law when Congress observed that compliance lacked oversight and design standards for accessibility. A provision in the Rehabilitation Act of 1973 that required access to programs and activities funded by federal agencies and to federal employment included the creation of the Board, which was originally named the Architectural and Transportation Compliance Board. The board was charged with ensuring federal agency compliance and with proposing solutions to the environmental barriers problems addressed in the ABA.

The work of the Access Board began in 1975 with the appointment of its first Executive Director, James S. Jeffers. The next year the Board helped the National Park Service design renovations to make major national monuments accessible during the Bicentennial celebration. The Board also worked with the Airport Operators Council International to publish “Access Travel: Airports” and worked with Amtrak to design accessible railroad cars.

The Board’s mandate and structure was changed with the Rehabilitation Act Amendments of 1978. Along with some amendments to the 1973 Act, the law authorized the Board to establish design guidelines under the ABA to establish a minimum level of accessibility. Their technical assistance role was expanded to include providing help on the removal of barriers as well as communication barriers in federally-funded facilities. The Board was also directed to provide technical assistance to private entities.

In 1982, the Board published the “Minimum Guidelines and Requirements for Accessible Design,” the first comprehensive set of accessibility requirements established by the federal government. These guidelines became the basis for standards, the Uniform Federal Accessibility Standards (UFAS), implemented by several designated agencies to enforce the ABA. The UFAS served as the enforceable standard for more than 20 years.

On July 26, 1990, the Americans with Disabilities Act was signed into law. The ADA bans discrimination based on disability in the private sector and the state and local government sectors and requires access to programs and services, facilities, transportation, employment, and communication. The wide range of facilities in the private and public sectors covered by the ADA greatly expanded the mission of the Board.

On the first anniversary of the ADA, the Board published the ADA Accessibility Guidelines (ADAAG), which contained detailed design requirements for accessibility in new construction and alterations. On the same day when the Department of Justice adopted the ADAAG as the basis of its enforceable standards, compliance with the requirements under the ADA became mandatory.

In September of 1991, the guidelines were expanded to include transportation vehicles and facilities. In the following years, the Board supplemented ADAAG to specifically address state and local government facilities, including courthouses and prisons (1998), children’s environments (1998), and recreation facilities, including play areas (2000-2002). It also initiated rulemaking to address access to streets and sidewalks and to trails, beaches, and picnic and camping areas.

The Rehabilitation Act Amendments of 1998 was signed into law in August of 1998. This law required access to electronic and information technologies procured by the federal government. The Board was assigned the responsibility for developing and keeping up to date accessibility standards for the federal government’s procurement regulations. The standards were published in December 2000, which addressed access to the various types of technologies covered, including computers, hardware, software, websites, and electronic office equipment.

The board completed a comprehensive review and update of ADAAG on July 23, 2004. Provisions were updated so that the guidelines continue to meet the needs of people with disabilities and keep pace with technological innovations. The result of the work of a cross section of stakeholders, including representatives from disability groups, the design profession, and building codes organizations, was a historic level of harmonization between the Board’s guidelines and model building codes, such as the International Building Code (IBC), and industry standards.

In 2010 “The Patient Protection and Affordable Care Act” was signed into law. The law includes a provision to amend the Rehabilitation Act to address access to medical diagnostic equipment, including examination tables and chairs, weight scales, x-ray machines, and other radiological equipment.3

The process for developing standards and guidelines by the Access Board includes organizing an advisory committee or regulatory negotiation committee that allow stakeholders and interested parties to develop consensus recommendations on the substance of a rule. The rules must then be cleared by the Office of Management and Budget (OMB) in proposed and final form before they can be published. The OMB is usually allotted 90 days to complete its review that estimates the costs and other impacts of the rule.

In the course of its rulemaking activities, the Board has organized these advisory or regulatory negotiation committees: