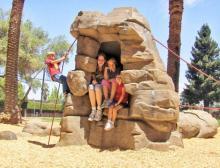 Dan Christensen, a rock-climbing wall designer, founded the UPC Parks division in 2007.1 They began with a play system composed of Monolith climbing boulders, connecting Rope bridges, and Roamers such as stepping stones and log “paths” to complete a “linked-play” system. These nature inspired structures feature caves, ledges, footholds, overhangs, handholds, rope bridges, and nets2 and are based on the concept of “continuous play,” the idea that children can reach all parts of the playground without touching the ground. UPC Parks' Rocks & Ropes system is designed to stand alone or to interface with post and deck commercial play systems.3

From the beginning, UPC Parks has offered thematic custom play designing as well. Two years later in 2009, they began offering PolyFiberCrete® Creatures to add more thematic art and play structures to playgrounds.4 Made with either a stain finish or a mosaic tile look, the creatures range from bugs to bears in all sizes.

The following year in 2010, they added water play features such as the Tad Pool, the Mud Puddle, and Ruby Falls.5 Their structures allow the children to control the water flow and create with sand and water on the playground. Wood grain or rock site furnishings were introduced in 2011 and include benches, tables, planters, retaining walls, and trash receptacles. They also offer an outdoor classroom set up.6