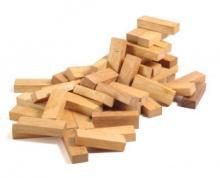 Caroline Pratt, an American innovative educator who was part of the progressive movement in the early 1900s, is credited for developing wooden blocks, called unit blocks. They were similar to the blocks used by Friedrich Froebel in his kindergartens.1 Using play with physical objects as the basis for learning revolutionized early childhood education at that time, and unit blocks continue to be used in classrooms today.2

While children can use unit blocks as building blocks in their play, the subtle learning of math concepts is achieved as they discover that two units are the same size as a double unit as well as four half units make a double. Using unit blocks helps children visualize the math concepts.4 The current use of manipulatives in classrooms to teach math and science had its origins in unit blocks and block play.5

When Caroline Pratt opened her school in Greenwich Village, New York, in 1914, her unit blocks were an important element to her program.6 Blocks were emphasized at City and Country School as open-ended play tools that had infinite possibilities. Children could work alone or join with others in social interaction that encouraged dramatic play and developed social skills, such as executive function, self-regulation, cooperation, problem solving, and risk taking.7

As Pratt observed children deeply absorbed in block play, she noted, “In his play (he) was thinking, learning, setting down his understanding of the way things worked, the relationship of facts to each other…educating himself.”8 Because of her extensive work in block play, unit blocks continue to be used in classrooms today as essential tools for learning.