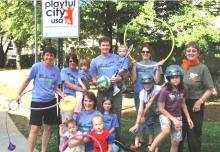 Pat Rumbaugh, a physical education teacher and tennis coach, wanted to promote play in her community of Takoma Park, Maryland, located in the Washington, D.C. area. After contacting KaBOOM! for information, she invited a group of people to form a committee to promote indoor and outdoor play for all ages.1 TakomaPlays! was officially formed in 2009 and has an active committee of students, parents, seniors, and members of the city’s government.

With local grants Mary Hanisco, the committee's director, has been able to fund traveling summer play groups that meet in different parks throughout the summer. The small groups range from 40 to 100 people in attendance with a variety of activities including games, music, and arts and crafts. TakomaPlays! has taken surveys at each park play group to better plan for play activities and seek future grants.2

TakomaPlays! also hosts citywide Play Days in the summer and winter drawing hundreds of people to one central location for activities, such as playing dress up in costumes, building with cardboard boxes, storytelling, dancing, performing music, playing board games, and participating in team sports.3

Pat, known as the Play Lady, who initiated contact with KaBOOM! and facilitated Takoma Park in becoming a Playful City USA community, and Mary Hanisco have both been honored as KaBOOM! Playmaker of the Month.4