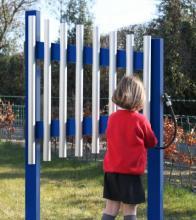 The Chimes Company offers indoor and outdoor recreational musical instruments and sensory equipment for inclusion in playgrounds, schools, nature and botanical parks, and rehabilitation and therapy facilities as well as zoos and family entertainment centers. Their note accurate instruments extend the benefits of musical play and music therapy to persons of all ages and abilities.

George Laibe, The Chimes Company Owner and Principal, had a very successful career in the music industry and left that industry to form the International Amusement Alliance, LLC (IAA) in 2001. While he had worked years before and after his music business career in the amusement park industry as a designer, contractor, and manager, he formed The Chimes Company as a subsidiary of IAA in 2009. He had diversified into the playground industry by first representing a playground manufacturer and then forming his own company, Themed Recreation Company, also a subsidiary of the International Amusement Alliance, LLC, when relocating back to his home in the Phoenix, Arizona area.

As George was designing a playground that needed to be totally ADA compliant beyond ambulatory concerns, he researched non-physical sensory type equipment. His discoveries led him to begin to gather distributor rights from all major exterior musical instrument manufacturers in the world. Additionally, George began to create and manufacture his own musical instruments, musical accessories, and education programs.1

The Chimes Company believes in “makin music everywhere” through their variety of chimes, bells, cymbals, rain wheels, xylophones and metallophones, drums, sensory equipment,and instruments for preschoolers through adults. He has also developed and conducts music classes for special needs children and adults with his propriety “Everybody Plays, Music by Color” programs.2