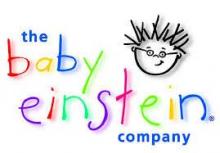 The Baby Einstein Company, a division of the Walt Disney Company, offers multimedia products, toys, and baby products for children aged three months to 3 years old. Under the slogan of “Where Discovery Begins,” they offer an introduction to the subjects of music, language, art, science, and mathematics from a baby's point-of-view.

In Alpharetta, Georgia, former teacher Julie Aigner-Clark produced with her husband, Bill Clark, a video board book and founded the Julie Aigner-Clark Films company in 1996. They released their first video, Baby Einstein, in January of 1997. Later marketed as Language Nursery, the VHS video featured music, numbers, words of different languages, stories, and visuals of real world objects such as animals, nature, and toys. That same year they launched a website to expand their marketing beyond retail outlets.

The company was renamed The Baby Einstein Company in January of 1998. That same year they released Baby Mozart, which won the Video of the Year award from Parenting Magazine and Top Selling Video of the Year award from Specialty Retailer Magazine. They also expanded into the music CD market with Baby Mozart and Baby Bach CDs and added an online store to their website.

Adding to their genre, in 1999, The Baby Einstein Company added the duo of video and book sets, Baby Shakespeare and Baby Van Gogh. Expanding on their video subjects, they introduced their patented Discovery Cards that same year.1 By 2000 they had reached $10 million in revenues and Julie sold a 20% stake of the company to Artisan Entertainment and Family Home Entertainment.2 Nearly two years later, in November of 2001, Julie sold the remaining 80% of the company to The Walt Disney Company.

At that time, The Baby Einstein Company products were available in more than 30 countries and in at least 25 different languages. Two years later, in 2007, they produced their 25th DVD, Lullaby Time, which joined such titles as Baby Dolittle: World Animals; Baby Newton: All About Shapes; Baby da Vinci: From Head to Toe; and Meet the Orchestra: First Instruments. In 2009 they offered a line of non-classical music CDs based on folk music from around the world, and the following year they launched their New Discovery Kit Collection as a “new way for babies to discover the world.”3

For six consecutive years (2003-2008), The Baby Einstein DVD Collection had been named as one of the top infant products by the American Baby Magazine through their American Baby Best of the Year (AMBY) Award.4 Since 2002, The Baby Einstein Company products have received recognition and endorsements from nearly 20 different groups such as the Creative Child Magazine, Mom's Choice Award, National Parenting Publications Awards (NAPPA), and Parents' Choice Award.