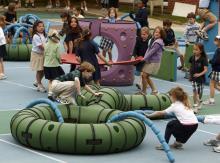 Snug Play systems were inspired by the Experimental Playground Project that started in 2000 in the United Kingdom. The Project allowed children to try out new ideas for the design of their playground using wooden pallets, traffic cones, cardboard tubes, chalk, and fabric. What resulted was a highly innovative playground design that inspired other schools to experiment in the same way with their children.1

Tim and Hattie Coppard, a brother and sister team of visual artists, were inspired by the Experimental Playground Project. In 2004, they began designing large-scale, manipulative loose parts for play after observing children interacting with similar pieces in the project. By 2007, the first Snug Play system was manufactured in the United Kingdom. In 2008, PlayCore approached the Coppards about manufacturing Snug Play systems in the United States. Snug Play USA was launched by PlayCore in 2010.2

Designed for either indoor or outdoor play spaces, Snug Play Systems can be used for directed fitness-promoting play or self-directed, creative play. For inclusive play, they were rated high in the sensory and communicative categories by the Lekotek Center AblePlay Rating system.3

Snug Play offers nine play elements: the bump, cone, wave, wall, noodle, spider, pad, mound, and full loop. These tactile elements combine soft and rigid play surfaces that are durable and weather-resistant. The open-ended play elements can be easily linked by the children in as many ways as their imaginations can conceive and allow for constructive play as they manipulate them.4 Depending on the size of the play area and the number of children who will use them, Snug Play systems can be specifically configured for the best ratio of Snug Play elements.5