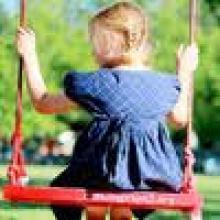 The Red Swing Project is the result of a University of Texas School of Architecture assignment as an urban intervention within the city of Austin, Texas. In February of 2007, one student began to anonymously hang red swings in public places to infuse a sense of playfulness into the urban environment. The assignment took on the feel of a science experiment as reactions to the red swings were observed.1

Attempting to use under-utilized public spaces, the red swings have been hung in unexpected places having a “familiar object set in an unfamiliar place.”3 They have been found in vacant lots, on downtown streets, and over small creeks. The response often prompts the playfulness the creator desired, but the swings are also found cut down in some locations.4

Initially the swings were made of red painted wood and retired rock climbing rope. But since the project first began, the concept has taken off with other people building their own red swings to place. Instructions for hanging red swings are provided by the Red Swing Project’s website.

By 2011 over 112 red swings had been hung in the United States, India, Thailand, Brazil, Taiwan, South Korea, France, Spain, and Portugal.5