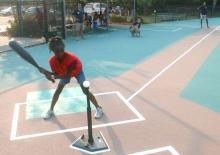 While recreational activities for children with disabilities may be rare, for adults they are almost non-existent. Returning from a national Miracle League Conference in 2010, Channing and Steve proposed expanding the league to include adults with special needs. They also determined that their existing Miracle League fields should also include a more inclusive overall play area with accessible playgrounds situated near the fields.2

The PlayToday! Foundation is guided by the belief that all people, regardless of their abilities, race, gender, ethnic, political, socio-economic, or religious backgrounds, deserve respect as individuals and should be given the opportunity to develop mentally and physically from formal and informal inclusive play as well as exercise.4

The PlayToday Foundation has partnered with the City of Charleston Parks and Recreation and the Charleston Miracle League to offer the HealthyPlay! Wiffle Ball League (HWBL). The league is designed to give children in the 4th-6th grades, primarily from Title 1 schools, the opportunity to participate in an organized sports league over the summer. In addition to learning lessons from participating on a sports team, the HWBL strives to boost children's self esteem, encourage socialization with other children, provide physical exercise, and teach nutritional guidance as well as provide a healthy meal for the children. An important part of the program is providing mentors through the team coaches and guest speakers from the Charleston community, who encourage the children with talks about what it takes to succeed in today's world.5

The PlayToday! Foundation has partnered with public, private, and non-profit organizations to help them reach their goals.6