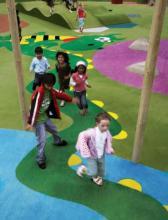 Bert and Shaun Patrick came to realize in 1984 that their local Nottinghamshire County Council had developed a range of synthetic grass surfaced sport and play systems for their schools. Gaining exclusive rights to sell these patented systems, including ChildsPlay, the Patrick family formed Notts Sport to sell the systems to other local authorities. Headquartered in Leicestershire, England, Notts Sport’s mission was “to introduce ChildsPlay and therefore Children's play to a Global audience in a fun and friendly way.”1

In 1991, Notts Sport bought the patents and trademarks from the Nottinghamshire County Council. The following year Glasgow City Council launched a drive to use the ChildsPlay system to update 600 playgrounds. Five years later, in 1997, as the ChildsPlay systems sales continued to grow, Bert retired as chairman and Shaun became chairman.

Though based on acquired patents, Notts Sport also developed their own surfacing products, such as the Lytag Envelope Impact Absorbing base system (1990), the vPad base system (1999), and the NottsBase EPP tile impact base (2008). The NottsBase EPP tile is designed with hemispheres on the underside that disperses impact through an air void.2 These various base layers support the VHAF NottsSward synthetic turf surfaces and in playgrounds offer a critical fall height protection of up to 3 meters (over 9 feet).3

The Green Dragon Free Play system, an inclusive play system designed without traditional play equipment, was introduced in Glasgow and Bermuda in 2005. The ChildsPlay Active Playground System was launched in 2011.

International sales began in Italy in 2001 and spread throughout Europe and to North America, Japan, and Hong Kong. By 2009, ChildsPlay systems were installed in 20 countries. With increasing sales, Notts Sport relocated to Lutterworth, Leicestershire, England, in 2010.4

Over the years, Notts Sport expanded their consumer base to include artificial turf for sports and landscaping. By customizing their VHAF NottsSward synthetic turf, they serve the different needs of cricket, tennis, soccer, hockey, golf, and multi-sport fields.5 Landscaping needs include pathways, picnic sites, parks, schools, sports clubs, equestrian centers, and shopping centers.