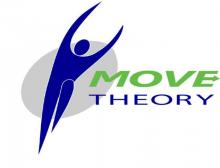 The Move Theory is a consulting and training company based on Dr. Kwame M. Brown's idea that exploring movement in a playful manner is the way to create “strong, healthy, happy young people.” He maintains that such exploration must also include “effort, consistency, interaction and cooperation with others and the development of internal belief...through infrastructure and gentle guidance.” According to Dr. Brown, supported playful movement is the way for optimal development of the youth, “so that they have the skills, health, and creativity to become who they choose to become.”1

With a background in molecular biology and neuroscience and a passion for all forms of fitness, Dr. Brown has spent two decades researching and teaching about movement, especially concerning the importance of play in children's development.2 By teaching and listening to children of all abilities and backgrounds, Dr. Brown began developing his theory of movement and play, called The FUNction Method. He chose to work with children as a means to preventing the later physical and emotional disconnects he saw in youth and adults. He also worked with a variety of organizations, gaining experience in business management and leadership.

Believing that childhood obesity is a lack of connection with natural movement, Dr. Brown began developing physical play programs for summer camps and school summer programs for the Fairfax County Park Authority in Virginia. He formed Move Theory in 2008 to develop the infrastructure for children's physical development through movement and play. Part of that infrastructure became FUNction!, a game based approach to acquiring physical skills with children during activities, capitalizing on “Coachable Moments” for skill or strategy instruction, and interfacing with the community to support active play.3 FUNction was used in 55 schools in Fairfax County in 2009, but due to funding cuts and the resulting lack of training for counselors, this program was discontinued temporarily.

Dr. Brown has spread his theory on movement and play as a national speaker and consultant. He created training materials for the Railyard Fitness Obstacle Course, which included his FUNction Method, partnered with KaBOOM! and Alliance for Childhood to form the “Play DMV” Coalition,6 and consulted with KaBOOM! to create a video about Family Play.7 He has also consulted with American Alliance for Health, Physical Education, Recreation and Dance (AAHPERD), and continues consulting relationships with INOVA Health Systems and Fairfax County Park Authority.  Currently, Dr. Brown is working to procure funding for a large scale private sector project in Brooklyn, NY, and is developing plans for a sustainable agriculture project in Hampton Roads.