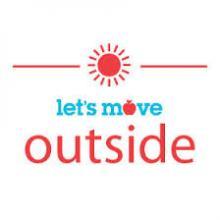 Administered through the Department of the Interior, Let's Move Outside! also partners with the National Park Service, Fish and Wildlife Service, Bureau of Land Management, and the Department of Agriculture's U.S. Forest Service. It supports the Fish and Wildlife Service's own Let's Go Outside initiative and the National Park Service Junior Rangers program. Twenty parks launched their Let's Move Outside Junior Ranger programs in mid-June of 2010 with thirty more by that summer's end.3

These national partners work with state, local, and tribal governments as well as community organizations to find local solutions for expanding participation in outdoor activities. One solution is the National Get Outdoors Day, or GO Day, that is celebrated nationally on June 11th, but planned locally.4 They also provide tools and information for parents to facilitate families being active outdoors and encouraging outdoor play.

When launching the Let's Move Outside! campaign, First Lady Michelle Obama summarized their mission: “Our overall goal … is to really get our kids active so that they make it a habit of moving around and seeing the activity they need not as a chore but as a fun way to explore our country and to do some things they haven't done.”5