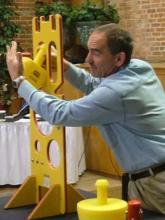 Tom Kalousek began working for the Bensenville Park District in Illinois after completing a Bachelor of Science degree in Geography/Geology. He supervised maintenance there and subsequently at the nearby Arlington Height Park District and the Elmhurst Park District. During this time Tom began a long association with the Illinois Park and Recreation Association (IPRA).

In 1978 he became the Superintendent of Maintenance at the Rockford Park District in Illinois. At that time, the Rockford Park District had 135 park sites on over 4,500 acres of land, including 112 play spaces.1 After six years at Rockford, in 1984, Tom was named the IPRA Park Professional of the Year.2 He worked at Rockford for a total of 21 years, during which time he became Director of Park Services and managed all capital planning, maintenance, land acquisition, police services, and special event services. He was also involved with the Northwest Illinois Association of Park Districts and the National Recreation and Park Association (NRPA).

While at Rockford, in 1985, Tom was the director of the IPRA's Park and Natural Resource Management Section and as such became involved with playgrounds and playground safety. Utilizing the recently published U.S. Consumer Products Safety Commission (CPSC) guidelines, he led safety training sessions for park staffs throughout Illinois. Tom's team was asked to attend the ASTM International (ASTM) meetings in Philadelphia, Pennsylvania to assist in establishing voluntary performance standards for public playground equipment. Tom has been a member of the ASTM F15.29 public playground committee since 1988. He has also served on ASTM committees concerning home playgrounds, soft contained play equipment, play equipment for children under two, and playground surface systems.

Tom was asked in 1995 to be an instructor for the NRPA National Playground Safety Institute (NPSI) Certified Playground Safety Inspector (CPSI) course. Over the 16 years as an instructor he has taught over 130 courses, including courses in Singapore, Hong Kong, Okinawa, Japan, and Germany. He has also chaired NPSI three times and served on the NPSI Exam and Instructor committee. Tom, in the leadership of NRPA, is a part of the 2011 NPSI changes, as they “move to a committee and networks approach to provide access to all individuals interested and involved with playgrounds and safety.”3

Also in 1995, Tom co-authored A Guide to Playground Planning, a publication initiated by the Illinois Department of Natural Resources (IDNR) and joint published with the IPRA. This planning guide was to assist rural communities in the creation and maintenance of playgrounds. As an author, Tom has contributed articles for The Playground Magazine.

As part of his responsibilities at Rockford and other Park Districts, Tom was involved with renovating old playgrounds or establishing new play spaces. While at Rockford, he was involved with the Robert Leathers Community Built Playgrounds and saw five playgrounds built, including one with a science theme at the Discovery Center Museum in Rockford and one designed and built by local teens.

Tom became the Executive Director of the Winnebago County Forest District of Northern Illinois in 1999. As such he manages over 10,000 acres of park and preserve areas that consists of a 147 acre arboretum, 4 campgrounds, 3 full golf courses, and 2 environmental education facilities.

Continuing his interest in playground safety, as a member of the IPRA Technical Advisory Committee in 2002, he assisted in utilizing a grant from the State of Illinois to develop a safe and accessible playground surface using recycled tires. The resulting product, SMARTE, meets the ASTM F1292-99 Head Impact Attenuation and F1951-99 Wheelchair Accessibility standards, has a critical height of 17 feet, and can be installed by volunteers.4

Tom is also on the steering committee of the US Play Coalition that was formed at Clemson University in 2009. The US Play Coalition combines organizations and interested individuals to promote play “as a valuable and necessary part of a healthy and productive life.”5 Tom's own philosophy of play supports these values: “Play is a state of mind and we should never forget the joy and happiness we feel when we are free to be or do whatever our hearts and mind can conceive.” He also agrees with Plato, “You can learn more about a person in an hour of play then in a year of conversation.”6