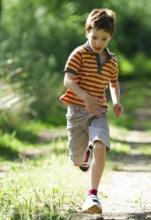 how to play Kick the Can

A classic children’s game, Kick the Can has elements of hide and seek, tag, and capture the flag in its game play. The rules of the game are simple and can be played outdoors in a variety of settings, including back yards, streets, or open spaces that allow for hiding places for children.

Rather than using a ball, the only piece of equipment is an object that can be kicked. The name of the game is Kick the Can, because often a discarded empty can from the trash is used that can have rocks inserted into it to make noise. The game was a popular pickup game for children during difficult economic times. The origin of the game is unknown, but during the Great Depression in the 1930s the game was a popular pastime for children because it didn’t require any designated equipment or playing field.1

There are many variations of the game, but the common elements include a person who is “it” who looks for children who are hiding. The can is set up in the middle of an open area with the “it” person nearby. He counts to a pre-determined number with his eyes closed to allow the other players time to hide. When time is up, he begins to look for the hidden children.

Once he spies a player, he calls out their name and hiding place, and then they both race to the can to see who can kick the can first. Some variations allow for just finding the person or for tagging him. If the hider kicks the can first, the game is started over with the “it” person giving the player time to hide again. However, if the “it” person kicks the can first, the other player is placed in “jail” which is a designated area for captured players to be kept until rescued.2

Any hidden player can risk being caught and attempt to rescue his jailed friends by racing to the can and kicking it before the “it” person can kick it. If he is successful, all the players in jail are released, and the “it” person must count again as players hide. Hidden players can strategically move around to other hiding places to keep out of sight and to maneuver to better positions to rescue jailed players.3

The game is over when the “it” person has successfully jailed all the players or a set designated time has expired.