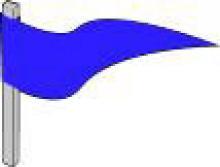 Capture the Flag is traditionally an outdoor game played by two teams of children with the object of capturing the opponent’s flag. It has been played by Boy Scouts, at summer camps, and in backyard neighborhoods for years. The game can be played on any terrain, and boundaries for the two territories are determined by the players, such as fences, roads, trails, and other recognizable landmarks that can serve as boundary lines.

Although there is no record of the first childhood game of Capture the Flag, the concept of the game has its origins on the battlefield. For centuries armies would fly their flags during battle to indicate they were still engaged in the fight. When a flag was captured or lowered by an opponent, it indicated there was no one left to raise the flag and signaled defeat.1

The rules for engagement are usually decided by the players, but they follow similar guidelines. Once the boundaries for the two territories are set, the players also determine the two areas designated as jails for captured opponents. Children who venture into their opponent’s territory can be caught or tagged and placed in jail where they must remain until one of their teammates can break through enemy lines and rescue them.2

With the boundaries determined, the teams are given the signal to hide their flags in their territories. The flags must be visible, although they can be placed as inconspicuously as possible. Each team will usually determine which players will attack the opponent’s flag and who will defend their own flag. Guards must stay a reasonable distance from the flag until an opponent nears their flag. Scouting rules state the guards must stay farther than 50 feet from the flag until an enemy invades that space.

With the goal of capturing the opponent’s flag, attackers cross into enemy territory. Once the boundary line has been crossed, players can be caught by being tagged. They are then taken to jail where they must remain until one of their teammates can reach them without being caught themselves. Once they have tagged one of their jailed teammates, they are both given free passage back to their own territory and the rescued player can then rejoin the game.

The game is over when one team successfully retrieves the opponent’s flag and carries it to their own territory without being caught. If a set time limit has been given to play the game, the team with the most prisoners is deemed the winner if the flag has not been captured.3