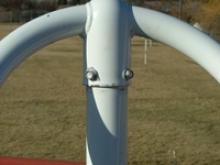 Entanglement is a “…condition in which the user’s clothing or something around the user’s neck becomes caught or entwined on a component of playground equipment.”1

The causes of entanglement include projections, protrusions, and open hooks, such as “S” hooks and gaps, that could entrap a child’s clothing.

If a bolt or a part of a playground component is projecting out from the play equipment and is accessible, playground inspectors will place the three successively larger protrusion gauges over it. If the projection extends beyond the face of any of the three gauges, it is considered a protrusion. If the projection increases in diameter from the initial surface toward the exposed end, it is considered to be an entanglement hazard.2

Protrusions also include bolts that extend beyond the nut for more than two threads. These hazards can also cause lacerations and impalement as well as entanglement.3

Open hooks such as “S” hooks or “C” hooks can entangle clothing. This can be especially hazardous on swings.

Slides have the potential for impact incidents and clothing entanglement incidents. Any projections that extend beyond the face of the projection gauge in the position of intended travel are considered protrusions. The undersides of slides are not subject to this test but are subject to the general protrusion requirements. Any spaces or gaps on a slide that might entangle drawstrings or clothing are particularly hazardous. Gaps are sometimes found between the platform and the slide bedway.