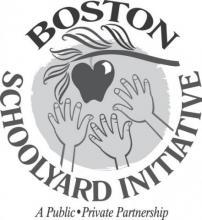 The Boston Schoolyard Initiative (BSI) was a partnership with private and public organizations for the purpose of “transforming schoolyards into dynamic centers for recreation, learning and community life.”1 Believing that the condition of the school grounds indicated the health of that community, BSI sought to involve the local neighborhoods to create inviting public spaces for recreation and learning in all the schoolyards of Boston.

Before 1995, the 250 acres of school grounds in Boston, Massachusetts were largely aging asphalt. Citizens had started some schoolyard revitalization projects but they were hampered by insufficient capital funding causing the projects to take 5-8 years to complete. In 1994, the Urban Land Use Task Force held meetings to assess the city's open spaces. They concluded that creating “clean, safe and green” schoolyards where their highest priority.2

The BSI had four goals: reach every neighborhood and every student, create attractive spaces for recreation and civic activity, design and support educational uses of the schoolyards, and involve the local citizens and organizations in all phases of the neighborhood projects.3

To achieve these goals they worked with numerous departments within the City of Boston and the Boston Public School District. They also worked with the Boston Schoolyard Funders Collaborative and ten other local organizations and professionals, including the Boston Natural Areas Network, Playworks, and Children's Investment Fund. The Boston Schoolyard Funders Collaborative included more than 20 private foundations and philanthropic organizations that had greatly facilitated the BSI in revitalizing schoolyards throughout Boston.4

Within six years about one half of Boston's schools and every neighborhood became involved with BSI. The Boston Schoolyard Initiative believed that, “If done thoughtfully, the process of building and maintaining schoolyards can play a vital role in the revitalization of entire neighborhoods.”5 Accordingly, the first phase of any project was organizing the community.

All “stakeholders” – parents, students, educators, administrators, custodians, local merchants, summer camps, senior citizen groups, crime watch groups, before and after school programs, community groups, and neighbors – would meet to develop a plan to satisfy local needs, raise funds, and plan for the grounds maintenance and any future schoolyard development. This process was facilitated by the BSI guides Design Workbook and Planning Workbook and is completed in one school year, followed by construction in summer. The entire planning and construction process took one year. All schoolyards included outdoor classrooms, built on a model developed by BSI over the last 15 years. Since 2001 there had been an education specialist on the Boston Schoolyard Funders Collaborative staff, and since 20076 all schoolyard projects included an outdoor classroom for offering students hands-on experience and “real world” applications relating to their core curriculum. Teachers broadened students' understanding through an inquiry approach and provided opportunities for exploration and independent learning through BSI's Science in the Schoolyard7 and Outdoor Writers Workshop programs, school district professional development courses and resources, and a trained on-site Outdoor Learning Facilitator.8

All outdoor classrooms included a sample woodland, an urban meadow, planting beds, informal, dispersed seating and a gathering area.9 The schoolyard that the neighborhood community planned in conjunction with a landscape architect, provided recreation and physical education opportunities, natural social development through play, and an outdoor classroom to extend and broaden learning.

Another facet the community considered was whether to choose a “signature” element to express their community. The final phase, however, was forming a Friends of the Schoolyard group who ensured the schoolyard sustainability.

During their first 17 years, Boston Schoolyard Initiative reclaimed over half of the asphalt acres (130 acres) and revitalized 81 schoolyards. The principals reported that the 25,000 students affected had increased their physical activity, improved student behaviors, and improved relationships between the schools and the community. In addition, teachers using the schoolyard for teaching hands on science and writing report increased interest in science and improved vocabulary, with particular benefits for English Language Learners and children with special needs.10

In 2000, BSI received the Gold Medal James C. Howland Award for Urban Enrichment for cities with a population of more than 500,000. They were also honored with the Faces of GreenSpace Award from the Boston GreenSpace Alliance.11 Green practices that BSI had incorporated included green roofs on tool sheds and recycled rubber playground surfaces. The BSI model included new outdoor classroom designs in every schoolyard renovation to bring teaching outdoors and nature to the schoolyard.12

As a leader in revitalizing urban schoolyards, BSI joined in forming the International School Grounds Alliance (ISGA) in 2011. They were part of the ISGA's inaugural steering committee dedicated to creating and caring for school grounds that support children's “learning, play and wellbeing.”13