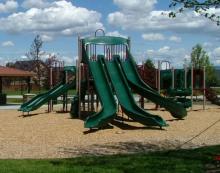 One of the oldest playground companies in the United States began in 1920 when John E. Burke incorporated the J.E. Burke Company in Fond du Lac, Wisconsin. What started as a weather-stripping business built on the family farm changed drastically in 1920 when one of their friends asked them to build a slide.

With a love of designing and a growing family of their own, J.E. and Ethlyn took the challenge and started designing and manufacturing playground equipment, such as slides, see-saws, swings, carousels, and chinning bars. Very soon the playground products took over the focus of the company as well as the showroom. When it was warm in Wisconsin, the showroom was expanded to the outside lawn where local children could “test” the products.

By 1935, the various playground components coalesced into their first residential line called the Swing King. Ethlyn's advertising rhyme, “plenty of play the Swing King way,” became a household jingle and spread the fame of the Burkes and their playground products. J.E.'s innovation continued with the creation of the Swimming Wheel and the Toboggan Slide.

The 1940s brought a diversion of the company's innovation and manufacturing to help the war effort. J.E. designed a self-contained ammunition cart that held a 75 MM Howitzer machine gun that was parachuted to the army. The cart, called the Paracrate, was also used to parachute in food and other supplies, including medical supplies. For their dedication and valuable contribution, the J.E. Burke Company was awarded an Excellence in War Production citation in 1943.

Later that same year a fire destroyed their facility, but with that same determination to build their company, they rebuilt the destroyed facility. J.E. and Ethlyn returned to creating and building quality playground equipment and expanding into auxiliary products, such as picnic tables, grills, benches, trash containers, and sports equipment. In so doing, they were innovating again by creating a full playground environment. Other additions in the 1940s included adding wood products and transportation-themed “jungle gyms,” such as the fire truck, rocket, dump truck, and car.

The Burke children became leaders in the company in the ’50s with son Bill heading the main headquarters. By 1952 their new East Coast manufacturing center in New Jersey was run by John Jr. and their daughter Patty managed the main office. By the time that J.E. Burke died in 1966, the company was in capable hands. Ethlyn remained involved as secretary and treasurer.

Two years later the company headquarters in Fond du Lac expanded into a 64,000 square foot manufacturing and warehouse facility. The New Jersey plant was closed and all operations centered at the Wisconsin location with Bill as President and John as Vice President and General Manager.

While the 60's brought brightly-colored playground equipment and space-themed rockets to echo the first moon landing in July of 1969, the ’70s saw a concern for the earth through producing products from recycled plastic.

In 1972 the ingenious Funnel Ball® was invented by the J.E. Burke Company, and the concept spread from them to many other companies. In the same year, they expanded their production and warehouse space by 20,000 square feet.

In 1994, after expanding their headquarters again, BCI Burke introduced Genesis, the first ever play system designed specifically for preschool children. Made from soft, roto-molded plastic and featuring ergonomic designs for smaller hands and feet, the Genesis won three awards: the Industrial Design Excellence Award in 1996, the National Association for the Education of Young Children in 1997, and from Business Week. It was also featured in the Milwaukee Art Museum in 2003 as a special exhibit.

The Spiral Slide, the Rock Climber, and the Satellite Climber were all introduced in 1995 as well as the Repro Series 1000 product line, which was BCI Burke's first recycled plastic playground.

Continuing their new products, the Series 3000, with 3 1/2” posts and a bolt-through system for smaller spaces, was released in 1997. Major changes came in July when the company was bought by Tim Ahern and a group of investors. The following year in 1998 Mark Sondergard, who had been the company's accountant, joined Tim in seeking to lead BCI Burke into the 21st century. Together they faced the outdated processes and equipment as well as the manual inventory management, which couldn't keep up with the demand for their products. These growth challenges were met by streamlining every aspect of manufacturing and shipping.

By 2000, BCI Burke was back to introducing innovative products, such as the Monster Slide™, the first triple chute slide. This decade saw the release of many new products including the Intensity® fitness play complex, which is a deckless compilation of spinning, climbing, jumping, and sliding play events that are designed to increase fitness, coordination, and balance. Built on 5” posts and direct-bolt through fasteners, the Intensity® expands on the previous Circuit Play® concepts. A major addition is the various rope climbing activities, which are made of polypropylene cords and steel strands. By using swivel connectors, the rope climbing activities can be installed at different angles for different challenges.

With the release of the Nucleus™ in 2009, BCI Burke introduced KoreKonnect®, a direct-bolt clamp system that uses two bolts for strength while still allowing the versatility needed to maximize each 5” post for connecting components. This flexibility allows the combining of traditional components with their Intensity® fitness play events to maximize any space requirements. They also introduced the EZKonnect® system for connecting platforms to posts by a two bolt per corner system, which includes a self-leveling feature.

Besides having innovative products, safety is also a priority at BCI Burke with their ISO 9001:2008 Certification, being a founding member of the International Play Equipment Manufacturers Association (IPEMA), and having all their products pass the IPEMA independent third-party testing process. Since 2003, they have also provided a free National Program for Playground Safety (NPPS) Safety Supervision Kit to every customer who has purchased a modular play system.

BCI Burke complies with all environmental laws and regulations and has achieved ISO 14001:2004 Certification. They have partnered with the U.S. Environmental Protection Agency Green Power Partnership Program to support the development of renewable energy and purchase renewable energy through the Alliant Energy Second Nature™ Program.

In 2009, CEO Tim Ahern was president of IPEMA and Design Engineer Scott Liebelt has served on the IPEMA Certification Committee where they both were involved with the ongoing evolution of the IPEMA procedures and the ASTM-1487 standards. Current global expansion has meant they are also compliant with the ASTM International (ASTM), Canadian Standards Association (CSA), EN 1176, and Australian standards.

As part of their customer service, the Grant Resource Center offers free grant searches for schools and non-profit organizations. Federal, state, and private foundation grant options are identified for a wide range of categories and grant writing is available on a fee basis.

For the past 90 years, BCI Burke has consistently been “Reinventing Play™” based on their core values of integrity, respect for people, teamwork, innovation, leadership, and performance.1 In this way they have built “a reputation for having a strong focus on customer service as well as producing high-quality products that last for decades.”2