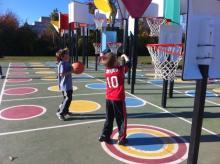 Rabbi Reeve Brenner invented the sport of Bankshot Basketball in 1981 as a way to have a “non-exclusionary,” non-competitive basketball game for all ages and abilities based on skill alone. By lowering the rim to eight feet and eliminating the running and jumping aspects of a typical basketball game, Dr. Brenner created not only an accessible game for those in wheelchairs, but also an inclusive game for those of all physical abilities, including those younger and older than the typical athlete and for families. Dr. Brenner then added the challenge of shooting baskets with deliberately bent backboards, missing backboards, and combinations of hoops and backboards that require intricate banked shots, ricochet and wraparound shots.1

Dr. Brenner calls his new sport a “total-mix sport based on universal design”2 which emphasizes intelligence, practice, and coordination while eliminating the exclusionary requirements of stamina, speed, and agility. This philosophy underscores the balance in total-mix sports where there is “no intrinsic advantage for participants by size, stature, gender or age.”3 Dr. Brenner has built in more than accessibility; he has created inclusive sports.

Based on universal design principles, a Bankshot court has 18 shooting stations plus a tiebreaker. At each station there are three stages of difficulty for that particular shot and for making the shot from all three stages. A typical Bankshot court can fit in about half the size of a tennis court and accommodate 80-100 participants at one time.4

The rules of Bankshot Sports are designed to encourage participants to play alongside each other rather than against each other.6 Each station is played before moving to the next station, thus focusing the progression forward with improving personal skills. By so doing, Bankshot preserves the non-competitive nature of playgrounds while addressing the often unmet needs of older children at play.

As part of the “art/play/think” trend in playgrounds, Bankshot Sports combines physics with creative art-like backboards.7 These backboards have been displayed at the Boston Children's Museum,8 New York City's Museum of Modern Art, and the Israel National Art Museum in Jerusalem.9