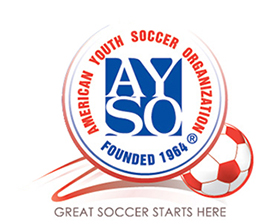 The American Youth Soccer Organization (AYSO) is a non-profit organization that provides youth soccer programs for participants in the United States as well as in the Virgin Islands and Trinidad and Tobago. Often called “the biggest soccer club in the world,” AYSO consists of over 50,000 teams and 500,000 players. Their mission is to develop and deliver quality youth soccer programs which promote a fun, family environment based on their “Six Philosophies.”1

Their philosophies are living tenets that separate AYSO from other sports organizations. They are:

The AYSO program is child-focused and has “what’s good for the kids” as its basis for everything it does. This philosophy extends to conduct for all players, coaches, families, and volunteers. To promote good sportsmanship, the players are expected to adhere to the Player’s Code:

The coaches and referees have their own set of codes as well to promote a positive experience.3

The Kids Zone program asks parents and spectators to adhere to these guidelines:

The AYSO soccer program is designed for the entire family. Parents can be coaches and referees, and the programs are run by registered volunteers. Training for volunteers to gain the knowledge they need to fill their positions including administrative and management training is available in workshops, webinars, and online courses.5

To address the growing need for child and volunteer protection in youth sports, AYSO instituted a program called Safe Haven. The program requires all volunteers to complete an application every year and agree to background investigations. Every volunteer is required to take AYSO’s Safe Haven training and be trained for their jobs. Volunteers are also asked to help promote safety and injury prevention by recognizing common risks and emergency medical conditions.6

AYSO is structured by Regions, Areas, and Sections. A Region is a community-based league that could range in size from less than one hundred players to several thousand. Each Region is run by a volunteer Regional Commissioner and a volunteer Regional Board. A group of Regions combine to form an Area. Area Directors support each of their regions, which could be close to one hundred areas nationwide. The country is divided into fourteen geographic Sections based on player population. Section Directors are responsible for activities in their respective Section. A National Office located in Torrance, California has approximately 50 staff members who support the AYSO programs.

There are programs designed to offer soccer for different age groups and athletic needs and capabilities. AYSO Playground is a program for children 3 to 5 years of age as well as the Jamboree, or the U-5 program, for 4 years old, which are designed to help them learn basic soccer skills. Core is the standard soccer program that spans the U-6 to U-19 age divisions, which is typically separated by gender, although some co-ed programs are offered in some areas. There is also a more advanced program called EXTRA for those who are interested in a more serious level of soccer. These players still adhere to the same core values of AYSO and the Six Philosophies.7

The American Youth Soccer Organization was established in 1964 in the Los Angeles area by founder Hans Stierle, a manager of a German-American sports and social club that had a men’s soccer team in the area’s ethnic league. Wishing to develop a program for children to play soccer, with his two sons’ help he began to form teams for his new organization. From the earliest beginnings he set out to ensure his program would provide fun for all players by creating the “Everyone Plays” concept. He designed a lineup card that divided the game into quarters, which made it easy for coaches to be sure to play each child at least half the game. The program was set up to be run by volunteers to keep youth sports affordable and community-based.8

In 1971, the first girls program was developed and has grown until approximately 40 percent of the AYSO’s players are girls. Also in the mid-1970s the first child with Down Syndrome was welcomed into the organization. As a result of this, soccer was eventually introduced into the Special Olympics.9 AYSO developed the VIP (Very Important Player) program to provide every child the opportunity to play soccer regardless of physical or mental challenges, including players who are visually impaired, or who have limited mobility, autism, Down Syndrome, or cerebral palsy. The VIP players are paired with “buddies” to help them on the field with the goal of providing a fun experience that helps them gain confidence, learn teamwork, and enjoy physical exercise.10

AYSO started offering soccer camps in 2004 to provide professional coaching with AYSO standards. There are a variety of programs available including full-day, half-day, and mini camps, as well as specific skills clinics and advanced training camps.11 A week-long AYSO Residential Soccer Camp is offered to players between the ages of 12 and 15 to not only teach them about soccer, but also to help them learn leadership and life skills.12

Since 1988, AYSO has conducted an annual week-long festival of soccer competition called the National Games. A National Games Lottery Draw is done each year resulting in invitations extended to hundreds of players from different Regions, Areas, and Sections to participate. The focus is on sportsmanship, team spirit, and making new friends.13