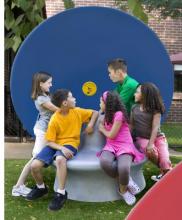 Waterfall Hope, a gathering place for creative and innovative craftspeople, led to the concept of combining aerobic play structures with sensory stimulating music and scientific principles.2 They began to wonder, “What if the squeaks and grinds (of the seesaw and swings) were replaced with music and other pleasing sounds... created or composed by the operators?”3

From this beginning the WonderSwing was designed with an internal air compressor that creates air flow from the children's swinging action. The air flows through sound holes on the swing's handhold, which allow four musical notes to be chosen by the child.4

The seesaw was also reinvented to create the WonderChime Seesaw. Drawing on the ancient aboriginal rainstick, the WonderChime has superballs that roll in a tube between the opposing seats, striking chimes along the way. With the seesaw movement and the creation of three different musical notes, the children potentially learn of fulcrums, levers, balance, motion, percussion, pitch and probability.5

WonderWorx also offers an indoor or outdoor musical instrument, the WonderTone, a free standing, three foot high arch, which has an internal electronic synthesizer. By operating a hand crank, musical tones are generated through a central loudspeaker. The pitch of the tones is altered by hand movements, which are read by a motion sensor, allowing the child or children to create unique musical compositions.6

A site furnishing that WonderWorx produces is the WonderDish, an interactive sound bench sometimes called the “whisper dish.”7 Installed in pairs facing each other up to 200 feet apart, the circular seating is backed by a parabolic reflector that transmits sound without power or electricity. Each WonderDish can seat several children or adults who can talk or whisper to others in the opposite WonderDish.

WonderWorx exhibited at a conference sponsored by the Smithsonian Institution’s National Air and Space Museum in 2010 as well as at the 2011 Epcot International Flower and Garden Festival at Walt Disney World. WonderWorx is also honored to be a selected, juried participant for the SciencePlay project in New York City.

WonderWorx inventions have been granted four U.S. patents and a fifth patent is pending.