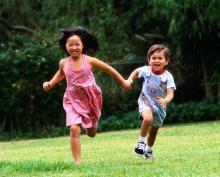 Play can be very therapeutic for children. Play is a way of removing stress and having fun. Play implies freedom, safety, trust, and a sense of well-being. Adding play to children’s lives leads to less depression, less anxiety, less stress, and less aggression. Play is fundamentally important for the emotional health of children and is a way for them to express emotion that cannot be said with words. Children who have been play-deprived or have experienced trauma or abuse will experience more fear, more pent up emotions, and more intense conflicts with others.1

Bruno Bettelheim, a child psychologist, viewed play as the means to allow children to attempt to bridge their reality and the world around them. He stated, “Play permits the child to resolve in symbolic form unsolved problems of the past and to cope directly or symbolically with present concerns. It is also his most significant tool for preparing himself for the future and its tasks.”2

Sigmund Freud, an early pioneer of psychoanalysis, believed that play had cathartic effects, allowing children to purge themselves of the negative effects of traumatic events.3 He saw fantasy as a way to gain access to their psyche, stating that play acts like a mirror to their subconscious, allowing play to be used as a diagnostic and therapeutic tool. Through fantasy play the child feels less emotional pressure, and the play helps the child assimilate the traumatic experience.4

To help children with emotional behavioral problems, therapies using play have been developed by many therapists. Using play and play materials, such as simple toys and art materials, children can be observed as they freely play. It is believed that children live through and work out their anxieties by making connections with play experiences. This is especially helpful if children lack sufficient maturity to express themselves verbally about their feelings.5 Information can also be gained through role play, modeling, identification, and many other techniques used as play therapy.6