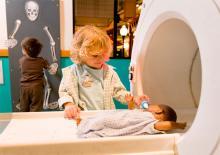 The Please Touch Museum in Philadelphia, Pennsylvania is a nonprofit interactive museum for young children, which provides “learning opportunities through play” that lead to a “lifetime of learning and cultural awareness.”1 Their mission centers around being: playful and fun, creative and innovative, educational, safe and clean, diverse, child-centered, family-focused, and collaborative.2

On October 2, 1976, during America's 200th anniversary of the Declaration of Independence, Portia Sperr, a Montessori educator, led parents, educators, and artists to open one of the first museums designed especially for children ages 7 and under. Located in a corner of the Academy of Natural Sciences, children played and touched “their way through exhibits that engaged their senses and ignited their imaginations.”3

By 1978 they had outgrown their “corner” and moved to a larger facility nearby on Cherry Street. After five years of growth they acquired and renovated a 30,000 square foot, 3 story building in the museum district on 21st Street. Artists and educators integrated the arts, sciences, and humanities in multidisciplinary experiences designed for young children's developmental needs. At this new location, children and parents could play and learn together without waiting in long lines.

During the 1980s, as Please Touch Museum continued to grow, they established an annual Book Award in 1985 for imaginative, quality, and play-oriented books published within the most recent calendar year. In 2012, they added a Kids' Choice book award.5

The American Association of Museums accredited Please Touch Museum in 1988. Also that year, Portia's twelve years of directing the museum concluded and Nancy Kolb became the new Executive Director.6 Two years later in 1990, Please Touch expanded again, having acquired and renovated an adjoining building. The Museum was then able to increase its exhibit space by 40%.

Please Touch Museum initiated its own “Great Friend to Kids” (GFTK) Award in 1996. Their award honors organizations or individuals with ties to the Philadelphia area who enrich the lives of children of all ages through service, education, entertainment, or by providing inspiration. In 2008, Director Nancy Kolb received the GFTK Lifetime Achievement Award.7

The Museum continued to expand its programs and audience, beginning to outgrow the 21st location. In 2005, they signed an 80 year lease for the historical Memorial Hall in Fairmount Park. The Memorial Hall was built to be the Art Gallery for the 1876 Centennial Celebration of the 100th anniversary of the Declaration of Independence, an appropriate new home for an organization founded at the 200th anniversary celebration.8

Built in the Beaux Arts style, Memorial Hall's extravagant style had fallen into disrepair and needed extensive restoration. After three years of renovating and expanding the hall, Please Touch Museum's grand opening was on October 18, 2008. Their new home more than tripled their available space and placed them next to the Philadelphia Zoo.

Besides providing a new home for the museum, Memorial Hall's return to its original “glory” is part of a 20 year plan for a Centennial District, a cultural and historical attraction that will be completed in time for the 250th anniversary celebration of the Declaration of Independence. An additional benefit of the Memorial Hall location was the resulting expansion of their Art Collection to include the Centennial Exhibition and the Memorial Hall Collection.

Despite all the changes in location over the last three decades, Please Touch Museum's dedication to play remains the same. The timeless Memorial Hall houses the 40 foot “monument to play” replica of the Statue of Liberty and the Museum constructed a new carousel house, home to the historical Woodside Park Dentzel Carousel.9 The Museum also has two floors of interactive exhibits such as Rainforest Rhythm, River Adventure, City Capers, Flight Fancy, and Centennial Exploration. Additionally there is a theater, art program room, event rentals, tours, kids’ store, and a Please Taste Cafe.10

Please Touch Museum is recognized internationally for their philosophy and achievement of “purposeful play.” In a non-evaluative setting and in an unstructured way, the exhibits provide opportunities for hands-on activities, large motor skill development, and role-playing opportunities. They believe that “play provides the foundation for basic life skills such as building relationships, cooperation, negotiation and compromise as well as providing opportunities for children to find out who they are and what they enjoy doing.”11