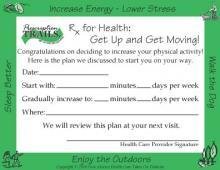 Park Prescriptions is a movement to create a healthier population by strengthening the connection between the healthcare system and public lands across the country. With parks, healthcare providers, and public health agencies working together to promote physical activity, good nutrition, and improved health, these partnerships encourage the doctor-patient relationship to consider how outdoor physical activity can be included in the treatment of health issues resulting from inactivity and poor nutrition.1

The Park Prescriptions movement recognizes two basic needs: healthcare practitioners need to be educated on the role of the natural environment in individual health and on how to effectively prescribe it, and the park leaders need to seek input from the health care community in recreation planning.2

The Institute at the Golden Gate, a key convener of organizations and leaders engaged in Park Prescriptions, released Park Prescriptions: Profiles and Resources for Good Health from the Great Outdoors in 2010. The report highlights case studies of programs around the U.S. that are filling a need to increase physical activity through the use of public lands.4 The Institute serves a role as a central place for coordination and communication so that local successes can be “leveraged into a more impactful, cross-sector movement that improves health and well-being on a national scale.”5 In 2011, the Institute launched an online best-practice portal, The Institute Parks & Health Guide.6

The Park Prescriptions movement was the result of discussions at the Institute at the Golden Gate’s Turning the Tide forums in 2009 and 2010, and the American Recreation Coalition’s (ARC) Partners Outdoors Conference in 2010. These gatherings resulted in a working group of physicians, health advocates, and environmental experts that met regularly at Fort Baker in the Golden Gate National Recreation Area with the support of the Institute and the ARC. Their continued meetings refined the vision of Park Prescriptions, which gained attention by both the recreation and medical establishments as word spread of their endeavors.7

The 2010 Turning the Tide event saw the beginnings of support from insurance companies who would provide financial incentives to their members for physical activity in state parks. The National Park Service now demonstrates its leadership with a Healthy Parks Healthy People initiative. Another supportive program is the Chicago Exercise Prescription Fitness Center Waiver, which gives free membership to park-based fitness centers for those with physician-prescribed exercise programs.8