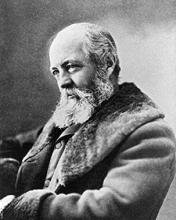 Frederick Law Olmsted and his colleagues were the first Americans to regard landscape architecture as a profession and laid the foundation for the developing practice in the latter half of the 1800s. Olmstead’s theories on landscape architecture have profoundly influenced the profession, and he is regarded as the most accomplished landscape architect in American history. During his career, his firm managed over 500 projects including city parks, college campuses, the grounds to the U.S. Capitol, and residential communities. He was also a champion for preserving scenic areas such as Yosemite Valley and Niagara Falls.

Born in 1822 in Hartford, Connecticut, Olmsted was a member of the eighth generation of his family to live in that city.1 He credited his father with instilling a love of natural scenery into him on their annual “tours in search of the picturesque” through the Connecticut Valley and White Mountains, up the Hudson River, and westward to the Adirondacks, Lake George, and Niagara Falls. Later in life he acknowledged, “The root of all my good work is an early respect for, regard and enjoyment of scenery…and extraordinary opportunities for cultivating susceptibility to the power of scenery.”2

Health issues prevented Olmsted from entering Yale College in 1837, and in the next twenty years he explored many different endeavors that all gave him experiences and skills that would eventually influence his later profession in landscape architecture. Although he did not achieve a formal college education, he studied surveying and engineering, chemistry, and scientific farming. He moved to New York City in 1840 to pursue various jobs, took a year-long voyage in the China trade in 1843, and operated a farm on Staten Island from 1848 to 1855, which his father had bought for him.

In 1850 he took a six-month walking tour of Europe and the British Isles with two friends, where he saw numerous parks and private estates as well as the scenic countryside. This experience resulted in the publishing of his first book, Walks and Talks of an American Farmer in England in 1852.3 As a youth, he had read books by several British authors on the subject of landscape gardening and was influenced by their theories on landscape art. Their teachings were to influence his future thoughts on landscape architecture.4

Accepting an assignment in 1853 to be a correspondent for The New York Times to travel through the antebellum South, Olmsted intended to look at slavery with an open mind rather than with the bias of an abolitionist. However, what he saw gave him a strong aversion for human bondage, and he wrote The Cotton Kingdom: A Traveller’s Observations On Cotton and Slavery in The American Slave States, 1853-1861, which widened the gap between feelings of the North and South. From his experiences in the South, Olmsted became involved in opposing the westward expansion of slavery as well as arguing for the abolition of slavery by the southern states. He wrote a second volume on slavery and the South as well as a book on traveling through Texas from his experiences while traveling for the newspaper.5

From 1855 to 1857 Olmsted was a partner in a publishing firm and managing editor of Putnam’s Monthly Magazine, a leading journal of literature and political commentary. During this time he spent six months living in London and traveling in Europe, where he again visited many public parks.6

His literary connections enabled Olmsted to secure the position of superintendent of Central Park in New York City in 1857 during the early development of the park. He met Calvert Vaux, who was working on a design for the park with Andrew Jackson Downing, but when Downing died during the design process, Vaux asked Olmsted to join him on the project for the design competition. Their plan, which they titled Greensward, was ultimately selected as the winning design.7 From 1859-1861 Olmsted was appointed the architect in chief of Central Park, in charge of the construction of the park.8

With the onset of the American Civil War, Olmsted took a leave of absence from his duties at Central Park in 1861 to become the Executive Secretary of the U.S. Sanitary Commission, the forerunner of the American Red Cross. The Commission was responsible for the well-being of the soldiers of the Union Army during the Civil War overseeing their medical needs and the sanitation of the soldier’s camps. When the stresses of this position became unbearable, Olmsted accepted an offer to oversee the Mariposa Mining Company from 1863-1865, a vast gold-mining complex in California. After the failure of the mining enterprise, his old partner, Calvert Vaux, convinced Olmsted to rejoin him in New York to complete the Central Park project. The year 1865 marks the shift in his career choices to finally concentrate on landscape architecture as his ultimate profession.

Vaux was instrumental in introducing Olmsted to the profession of landscape design. With his experience in collaborating with other designers, Vaux showed him how a professional design office should function. They formed the firm of Olmsted, Vaux & Co. and secured a number of important commissions, including parks and parkways in Brooklyn, a park system in Buffalo, the Chicago South Park, and the residential suburb of Riverside, Illinois. Their partnership dissolved in 1872, and Olmsted continued his work with several other architects and engineers in New York City. Major projects at this time included the United States Capitol grounds, the park on Mount Royal in Montreal, the park on Belle Isle in Detroit, the Back Bay Fens in Boston, and the street and rapid transit system of the Bronx.9

For thirty years, until his retirement in 1895, Olmsted created examples of the many kinds of landscape architecture designs meant to improve the quality of life in America. These included:

In each of these categories, Olmsted developed a distinctive design approach, which showed his attention to details as well as his vision for each project.11

Olmsted felt a pressing need to improve the health and well-being of Americans during this time of growing urbanization. The smoke from the cities’ factories, the crowded tenement buildings, and the unhealthy city life of the 1800s caused him to see that city parks could serve as a viable release from the stresses of urban living. With specific health benefits in mind, he and Vaux added a dairy barn in Central Park where a child could get a free cup of fresh milk. They also designed the park to be wheelchair accessible with the belief that city parks should be open to all. Including visitors from all classes was a new concept for some, but extremely important to Olmsted. He felt it could improve the morals of the people and described Central Park as “an educative and civilizing agency.” He installed signs to describe the rules of correct behavior in the park and hired a special Central Park police force to enforce the rules. He felt the result was “a refining influence upon the most unfortunate and most lawless classes of the city – an influence favorable to courtesy, self-control, and temperance.”12

Olmsted believed that the purpose of landscape architecture was to affect the emotions. He created passages of scenery in which the visitor would become immersed, experiencing the restorative effects of the landscape, which he termed as an unconscious process. He felt scenery worked unconsciously to produce a relaxing effect that counteracted the stresses of urban living. To accomplish this in his landscape designs he employed what he termed the “elegance of design” in which he created a composition where all parts were subordinated to a single, coherent effect. He guarded against distracting elements that would take the consciousness of the viewer away from the total effect. He disliked bright floral displays believing that they were destructive to the tranquil settings he designed.

He most often used two styles in his designs: the pastoral style and the picturesque style. The pastoral style was used to create a sense of peacefulness of nature to soothe the spirit. Reminiscent of the parks on British estates he had seen, his pastoral designs contained broad expanses of close-cropped turf broken occasionally by groves of trees. He would create his desired effect by having an indistinct boundary produced by the obscurity of detail further away and intricate foliage of the trees on the edge of the open space. When he employed the picturesque style, he would use complexity of light and shadow near the eye to give a “sense of mystery.” Using a variety of tints and textures of foliage made forms indistinct and created a constantly changing play of light and shadow. He utilized layers beginning with the ground cover and then adding shrubs and trees and sometimes creepers that covered the trunks and branches of trees. He always considered the character and situation of the place he was charged to improve to determine his style.13

Olmsted is also recognized for his pioneering efforts to preserve Yosemite and Niagara Falls as public parks free from commercial exploitation. He had visited Yosemite Valley while living in California, and in 1864 during the Civil War, Abraham Lincoln signed into law the Yosemite Land Grant to preserve the land “for public use, resort, and recreation.”14 Olmsted was appointed to head the commission charged with managing the new park. In 1865 he wrote a report outlining a program of minimal, unobtrusive development, which would include paths, overlooks, carriage roads, and camping facilities. The design of the park would protect existing features from damage from visitors and would choreograph the sequence and pace of their experience in the design of the roads, paths, and other facilities within the park. Olmsted also included in his report the basic argument for giving the government the responsibility of providing and maintaining national parks for the good of all people.

The area around Niagara Falls had been overrun with hotels and tourist attractions that forced tourists to pay to view the falls. Olmsted helped found the Niagara Falls Association in early 1883, and in 1886 he was tasked with designing the state reservation around Niagara Falls with Calvert Vaux. Their report outlined the need to acquire private property, remove previous development, and provide public access through the construction of park drives, paths, overlooks, and limited visitor amenities. They stated in their report: “Nothing of an artificial character should be allowed a place on the property, no matter how valuable it might be under other circumstances, and no matter at how little cost it may be had, the presence of which can be avoided consistently with the provision of necessary conditions for making the enjoyment of the natural scenery available.”15

In 1890 Olmsted was enlisted to work with the engineers and architects designing the World’s Columbian Exposition, also known as the Chicago’s World Fair. Working with a marshy site for the Fair, Olmsted utilized the natural landscape and created a system of lagoons and waterways in the design. The Fair opened in 1893 and was a great success.16

Due to failing health, Olmsted retired from his work in 1895 and was confined to the McLean Hospital at Waverly, Massachusetts where senility took its toll. He died in 1903, but the landscape architecture firm that he founded was continued by his sons and their successors until 1980. His home and office were purchased by the National Park Service and opened to the public as a museum.17