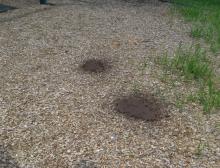 Mold can frequently be found on playgrounds with wood surfaces and in wood mulch. The mold that most commonly grows on wood playground surfaces is called a slime mold. This mold is irregular in shape and grows in various colors such as brown, yellow, pink, or white. Slime molds are a temporary nuisance and are generally confined to small areas.1 They do not pose health hazards to humans unless eaten, but they may appear unpleasant.2

Molds are fungi that grow in small masses visible to the human eye. They originate from spores that are airborne. When the spores become wet, they fuse together and form a larger mass called a colony. They feed on bacteria found growing on the wood playground mulch. Poorly drained and shaded playgrounds where the surface remains wet or where water collects after rain are prime areas for the growth of this mold. Extremely hot and humid weather will also stimulate its growth.3

The mold starts out as a color and is a slimy mass that can be several inches to more than a foot across. It produces tiny, dark spores. Over time, the molds will dry out and turn brown. Finally, they will appear as a white powdery mass. If left alone, slime molds will disappear in time. If the mold colonies are disturbed, they may release spores that will eventually cause a re-growth of the slime mold.4

Other types of mold, fungi, and mushrooms may be found in and around playgrounds with wood surfacing depending on the time of year, the geographic location, and the weather.