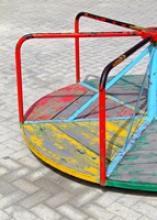 Lead has been identified as a potential health hazard found in both children’s playgrounds and in artificial turf. The effects of lead ingestion or inhaling are cumulative.1 Ingestion occurs when children touch the objects containing lead, such as deteriorated lead-based playground paint or inhale lead dust released from turf fibers.

Lead poisoning affects the body in the following ways:

Although deteriorating lead paint in homes is the main source of lead poisoning for children under six, coming in contact with older playground equipment with lead paint has been an additional source of concern. Playgrounds that were manufactured before 1978 or were repainted on site are the places where lead may be found in playground paint.3 In 1978, the U.S. Consumer Product Safety Commission (CPSC) banned the sale of paint for consumer use containing more than .06 percent lead.4

Fortunately there are few playgrounds that have equipment dating prior to 1978. However, some old traditional swing sets from that era as well as freestanding metal play equipment still survive and should be carefully checked for the possibility of lead paint.

Paint deteriorates as it ages due to exposure to the elements and to wear and tear. Lead in paint is released during deterioration. If a visible inspection of a painted surface on play equipment reveals that it is chipping and dusty, or paint chips are found on the ground under the chipped area, these are indications that deterioration has occurred. If this is observed, paint samples should be collected and analyzed by an accredited laboratory for lead. If lead is confirmed, the equipment should be removed or the paint should be removed by a paint removal professional.5 This is not a job recommended for a parks maintenance crew.

If lead is found in playground equipment paint, the soil under the equipment should also be tested for lead contamination.6

Lead dust found in artificial turf can also be an additional source of lead poisoning for children. Tests of artificial turf made with nylon or nylon polyethylene blend fibers indicated that they are a potential health concern as they age. The turf fibers on older fields that have heavy use and are exposed to weather conditions deteriorate, and then dust occurs. The dust is easily inhaled and can be absorbed by the body.7

A study done by the University of Medicine and Dentistry of New Jersey (UMDNJ)  examined lead levels and simulated digestive tract absorption. The study found that even though the amount of lead absorbed was relatively small, the results may still cause the symptoms of lead poisoning.8

The rubber granules used as infill on some of the artificial turf fields are of special concern to young children. These granules can be transported to the homes of field users in their shoes and then picked up by young children in the homes and ingested.9 Field users are also at risk of inhaling or ingesting lead dust from the playing surface of contaminated fields.10

There have been no known cases of lead poisoning from older artificial turf fields, but several fields in New York and New Jersey have been closed after testing revealed high levels of lead. Investigations are being conducted by the CPSC and the Environmental Protection Agency (EPA) on all types of turf in an effort to limit exposure from lead.11

If a lead test of an artificial turf field is needed, it should be done by a licensed lead consultant. A state department of health should be able to identify registered consultants. Other resources for this subject are: Centers for Disease Control and Prevention (CDC), Agency for Toxic Substances & Disease Registry, and Consumer Product Safety Commission (CPSC).12