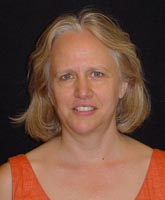 As a teacher, researcher, and writer, Dr. Elizabeth N. Goodenough has explored and championed children’s need for their own spaces. She maintains that spaces for self-discovery and time for undirected play “deserve to be treated with as much care by educators and families as the cultivation of literacy and mastery of math.”1 However, noting increasing urban development and societal concerns about safety, she has also raised the question “where do the children play?”

Growing up in the Great Lakes area, Dr. Goodenough fondly remembers attending Grosse Pointe University School in Detroit during the mid-1960s. By that time the former private school had become a public school for both girls and boys. It was here that she found exceptional teachers and learned to love learning.

One particular teacher, Elizabeth Ferguson, epitomized teaching effectively through a variety of approaches. At age twelve, Dr. Goodenough learned Latin through classroom games and grammar tricks, and she saw firsthand how play was an effective way to learn in the classroom. Though she left Grosse Pointe University School in the 10th grade, she kept contact with this influential teacher, and when she was 16 years old, she toured the Mediterranean with Ferguson and her elderly mother.

Dr. Goodenough left Detroit for the college preparatory high school, Westover School, in Middlebury, Connecticut. She went on to attend Smith College, a women’s liberal arts college in Northampton, Massachusetts, where she earned a B.A. degree in English and American Literature in 1969. From there Dr. Goodenough attended St. Anne’s College in Oxford University, England, where she earned a B.A./M.A. degree in English Literature in 1970.

Dr. Goodenough became an English teacher at Brookline High School in Brookline, Massachusetts, which is just south of Cambridge and Harvard University. While teaching, she also completed a Master’s Degree in Secondary English at Harvard Graduate School of Education.

With her 3rd degree in hand, in 1971 Dr. Goodenough moved about an hour north of Harvard to become the Curriculum Director and Instructor in the New Hampshire College Prep Program at the Pease Air Force Base in Portsmouth, New Hampshire. The following year she moved southwest to Andover, Massachusetts, where she was an English teacher at Phillips Academy, a college preparatory high school.

By 1976 Dr. Goodenough was back at Harvard, this time as an instructor in the Department of English and as an Assistant Senior Tutor at the Eliot House. During this time she began work on her English and American Literature Doctorate Degree, which she received from Harvard in 1982. At this point she became a Lecturer in the Department of English and the Allston Burr Senior Tutor at the Currier House at Harvard.

Six years later in 1988, Dr. Goodenough moved across the country to Claremont in Southern California to be an Assistant Professor in the Department of Literature at Claremont McKenna College. While there, she began writing reviews and co-edited her first book, Infant Tongues: The Voice of the Child in Literature, which was published in 1994. Collaborating with Mark Heberle and Naomi Sokoloff, Dr. Goodenough gathered essays that explored how children were represented in literature from the Renaissance to present day in English, French, German, Russian, and Hebrew cultures.

In 1998 the Residential College students organized the conference, Secret Spaces of Childhood, to explore how places in children’s literature shape their identities. This conference led to further research and eventually to the compilation of essays, poems, and stories that define the importance of each child having a secret space. Published in 2003, her book Secret Spaces of Childhood led to more workshops and lectures and to sparking a national discussion on play. As Dr. Goodenough explained about children’s spaces, “It’s not just a fort, but could also be a blank piece of paper. No two are ever alike; it’s the proverbial snowflake. It’s just that it’s yours and you protect it.”2

All three of these works speak to the importance of play in children’s development, facilitate a dialogue about “the role children and nature must have to thrive and be sustained,” and explain “the creative magic that can arise when children are allowed and even encouraged to play with abandon.”3

During this time, Dr. Goodenough also co-organized with Andrea Immel, the curator of the Cotsen Children’s Library in Princeton, a conference in October 2003 entitled Under Fire: Childhood in the Shadow of War. Growing out of that conference came a book by the same name that was published in 2008. Under Fire is a collection of internationally known authors that explore how war and its aftereffects are represented in children’s literature and documentary films.

With Dr. Goodenough’s evolving focus on play places and children’s inherent right for creative play, in 2014 she moved from lecturing in the Comparative Literature Department to the Arts and Ideas Department of the Residential College, University of Michigan. She is known to use creative teaching methods utilizing performance-based learning, individual learning styles, exploration, and auditory experiences. In 2014 she was a finalist in the University of Michigan Provost’s Teaching Innovation Prize, and in 2016 she was awarded the Undergraduate Research Opportunities Program Outstanding Research Mentor Award.

Dr. Goodenough is an assistant editor of Michigan Quarterly Review, a Fellow of the Society for Values in Higher Education and serves on the Children’s Literature Association’s Phoenix Award Committee.4